And ISIS attack in Tunsinia last week left twenty-three dead, and footage has been released of the gunmen right before the attack.  In the footage[1], they appear to let one of the tourists go free before the massacre… 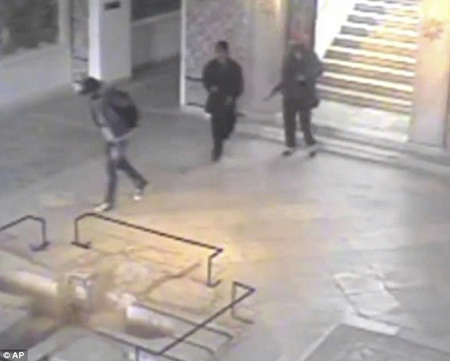 Heart-stopping camera footage has been released of two gunmen calmly strolling through Tunisia’s National Bardo musuem in the terror attack which left 23 people dead. The one-minute video posted on the government’s Interior Ministry Facebook page shows the two men scurrying through the Tunis museum, carrying assault rifles and bags. One of the attackers is wearing a baseball cap and a heavy jacket, while the other has a red hoodie and tracksuit pants.

At one point, they encounter another man with a backpack walking down a flight of stairs. They briefly acknowledge each other and let the unidentified man walk free before unleashing the deadly attack in the country’s largest museum.

No one knows who the man was or why they let him go free, but something tells me he ran hope and hugged his loved ones a little tighter that day.  Watch below…