HAH! Mainstream Media Is TICKED At Trump For PUNKING Them BIG TIME! [VIDEO]

Whether Donald Trump is the embodiment of true conservative ideology or not, all on the right should be willing to admit: the man knows how to steer a conversation. 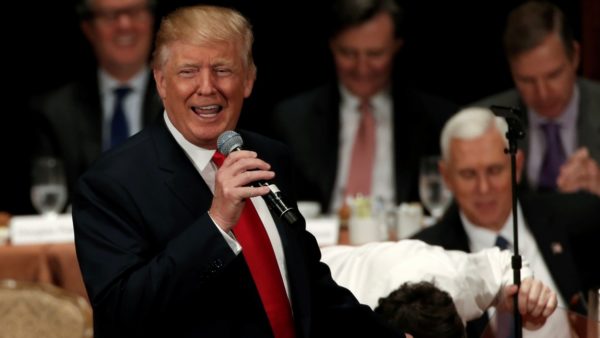 I was in shock when Trump used a feud with Sen. Lindsey Graham to gain millions in free advertising. The billionaire candidate was in a jam-packed primary race and after having had enough of Graham’s weak RINO-babbling, Trump released the senator’s personal cell number to the media.

Needless to say, Graham was none-too-pleased. But the stunt didn’t stop there…

Trump then leaked his “cell number” to Gawker who dutifully ran the number under a “fair is fair” premise. Only Trump changed the number to become a voice recording with a campaign pitch about making America great again.

The media that sought to inconvenience Trump instead steered millions of people towards listening to a campaign pitch. It was brilliant.

Now, Trump has pulled another fast one on the mainstream media that absolutely refuses to give the billionaire candidate a fair shake.

Knowing that the mainstream media would rather report on paint drying on a shed in Zimbabwe than offer him a media spotlight, Trump called a press event promising to reveal once and for all where he stands on the birther discussion surrounding Barack Obama.

After the media hurried to assemble to witness the controversial event, Trump instead treated them to an hour of retired top military brass and even a gold star wife endorsing the GOP candidate.

Trump then flatly admitted that he believed that Obama was born in America – only after the mainstream media had covered the event from start to finish.

The media went nuts[2] and were outraged to discover that the candidate had used their obvious biases as a tool. CNN’s Jake Tapper called it “a political rick-roll” and countless other anchors throughout the media circus were outraged about being tricked by the Trump Campaign.

Every American should answer this honestly: who would you rather have negotiating deals and serving America’s interests? The billionaire who routinely brokers international deals and has repeatedly conned the mainstream media into doing his bidding? Or the unindicted felon who sold access to foreign nationals as Secretary of State, got Americans killed in Libya and – at best – is too stupid to handle two email accounts or – at worst – is a traitor?

Who’s to blame here? The candidate who utilized the media’s vendetta against him? Or the media that was so eager to slam Trump that they jumped heedlessly at any opportunity to do so?