It’s almost Halloween and all the creepy decorations are coming out to help celebrate[1]. One in-particular Halloween decoration in Idaho…is getting more attention than others. 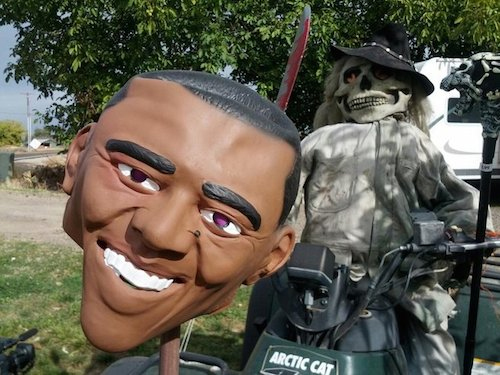 An Idaho man has President Obama’s head on a stick as part of his Halloween decorations. Richard Piersol said he enjoys decorating for Halloween and this year he wanted his political views known.

“I’ve got the Grim Reaper on the ATV, and Obama’s head is on the spear and he has been decapitated.

The Canyon County Sheriff’s department said Piersol is not breaking any laws with the display, and some officers have shown him their support.

“I’ve had three police officers stop and take pictures and give me the thumbs up,” Piersol said.

Piersol’s display was inspired by his opposition to President Obama.

In terms of racial prejudice, Piersol says his decorations have nothing to do with race.

“I’ve got a couple of African American friends of mine that have given me more ideas to put out there to make it look gorier. And it’s like ‘no, I don’t want to do that. That might offend somebody,’” Piersol said.

Piersol’s neighbors have not complained about him featuring President Obama’s head on a stick in the display, but one parent did have to answer a question raised by his son.

“My son asked me if it was a little bit prejudice towards certain individuals, say maybe the president because it has a head over there with a machete, I said no I don’t think it’s directed towards anybody,” explained local resident Wally Lester. “ think it just happens to be that situation the way they put it together.”

Piersol said he is open to changing the display, but there has not been any real pushback yet.

“If I have way too many people that don’t like it, I will take it down,” Piersol said.

Well if Obama is one of the horrors in his life…then why not? It is Halloween.