Hannity: With Obama, There Is an “Untold Story” with Obama

It seems like every time a Republican declares for the Presidency, the media digs so deep and far back into the candidates past looking for little nuggets of scandal they can expose about the potential future President.  With Romney, the media had to go back to high school to find someone who thought Romney was mean.  With the current occupant of 1600 Pennsylvania Avenue, it seems that little-to-no background digging occurred, and when people did expose questionable things about his past, the mainstream media seemed to not care.  On his program on Wednesday, Sean Hannity discussed with Mark Steyn his feelings about Obama’s hidden pas[1]t. 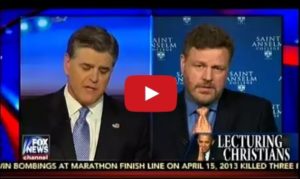 “At the end of the segment Sean dropped this curious

“You know, I have now come to the conclusion that, I’ve studied him now going way back to 2007, Mark, there is an unknown something with Obama. An untold story, I don’t know what it is. People are going to say, they’re going to assume what I’m thinking. I don’t know the answer. Everything is upside down in the world of Obama and none of it makes a lot of sense to me and it seems extraordinarily dangerous. On foreign policy, and even the economy, doubling the debt and all of these people on food stamps and on poverty. So.”

One thing is for sure.  If President Obama had something to hide, the mainstream media would be complicit in hiding it. Let’s hope whatever it is, if there is anything, isn’t any more destructive to the country than his policies have been.