In a vision of hell, one couple was able to capture footage of the carnage from the downed flight Malaysia Airlines Flight 17. With body parts spewing from the doomed airliner, the couple is aghast at the grisly tableau.[1] 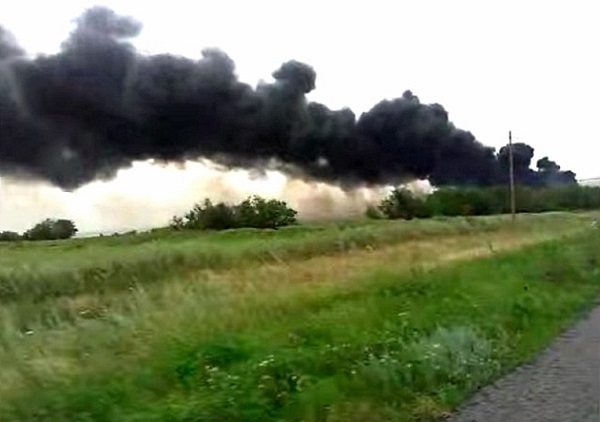 Harrowing new footage of the moment parts of MH17 crashed into a Ukrainian field has emerged one year on from the tragedy.

The shaky mobile video entitled ‘It’s raining bodies’ has been released on the internet and was shot by a traumatised couple as they drove past the scene where the Malaysian Airlines Boeing 777 was shot down, killing all 298 people on board.

The woman is so disturbed by seeing people falling from the blitzed plane amid the burning wreckage that she cannot stay and insists on driving away.

The couple’s conversation reads as follows:

Woman: ‘What’s there? What crashed?’

Man: ‘Don’t look there, what is all that?! A woman was flying or what, I don’t get it. (The woman passenger keeps crying).

Around them, the burning remains of the plane is visible.

The latest reminder of the tragedy came as pro-Russian rebels in eastern Ukraine have offered to assist families of the Malaysia Airlines flight MH17 victims to visit the crash site.

‘We, of course, are ready to provide all possible assistance for relatives who want to come to honour the memory of the loved ones who died,’ said Alexander Kofman, self-declared foreign minister of Donetsk People’s Republic.

‘There is no particular difficulty in obtaining documents, but we will assist anyway.’

Many relatives have resisted travelling to the region which is legally part of Ukraine but under the sway of pro-Moscow rebels who the West blames for downing the plane.

The militants backed by Moscow deny any responsibility.

An investigation by the Dutch Safety Board is ongoing, with the final report due in October.

The video is certainly harrowing and only underscores how important it is to find justice for those who were so callously murdered.