Your home is your castle – and when someone intrudes there it’s one of the most personal intrusions possible. Actress Sandra Bullock was home last year when a deranged fan invaded her home[1]. She kept her wits about her and hid in the closet and called 911, the audio of which has now been released. 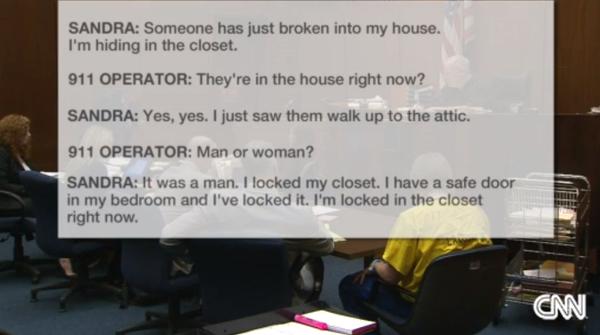 The transcript reads, in part: “Someone has just broken into my house. I’m hiding in the closet. I locked my closet. I have a safe door in my bedroom and I’ve locked it. I’m locked in the closet right now.”

The suspect? A 39-year-old man named Joshua James Corbett, who is accused of stalking the actress, breaking into her home. Corbett is also alleged to own a collection of illegal weapons.

Officer Jose Bermudez testified that Corbett was unarmed when he entered Bullock’s home; however, he was clutching a notebook filled with magazine cut-outs of the actress and declarations of love.

However, police found a cache of weapons, including illegal machine guns, when they searched his home.

Joshua James Corbett has pled ‘not guilty’ to all charges, and is currently being held on a $2 million bond.

This incident took place at Bullock’s Los Angeles home. One has to think that if it had happened in her Texas home, things would have turned out much differently – and in a bad way for the intruder.