In a redemptive move for the human race, a Australian college student stepped in to help a woman in need.  That woman, who was his cousin whom he had lost contact with, had re-connected with him on Facebook.  Tommy Connolly stepped in to help where he saw a need[1].  This kid is a hero. 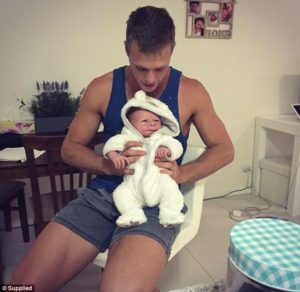 “Tommy Connolly hadn’t seen his teenage cousin in 10 years when she added him on Facebook out of the blue in December.

The 23-year-old Sunshine Coast University student was enjoying semester break and training hard in the hope of one day representing Australia as a champion sprinter.

He messaged his 17-year-old cousin Angela* (name has been changed for legal reasons) to see how she was doing and soon found out she was homeless, illiterate and 32 weeks pregnant.

Mr Connolly picked her up from where she was sleeping rough on the Gold Coast, let her move into his flat, took care of her through the final stage of her pregnancy and is now helping to raise her four-week-old baby boy.”

“Mr Connolly said Angela – whose last year of schooling was Year Six – had stopped taking hard drugs by the time she was 15 but at 16 she fell pregnant, and her baby’s father was sent to prison soon afterward.

By the time Mr Connolly met up with her she was 32 weeks pregnant, and he said he didn’t think twice about taking her in.”

“‘Obviously I’m not going to let her stay on the streets.

‘Everyone likes to tell me this is such a big responsibility, but I wasn’t thinking about uni or work or anything, all I was doing was thinking that she needed me.’

Because Mr Connolly was on university holidays at the time he had been working full time in his job at a fruit and vegetable wholesaler and he had saved $2800, just enough to cover the cost of moving into a new house and buying items for the baby.

He put his athletics training on hold so he could work enough hours to save money, but he returned to university as normal at the beginning of March because he didn’t want to delay his studies.”

This kid deserves a medal.  If only there were more young men who would step up to their responsibilities, let alone someone else’s, this world would be a much better place!