HEROIC By-stander Saves Cop From Being Swarmed By Angry Crowd- When He Did THIS!

An Upper Darby police officer who waded into a crowd of high school students to break up a fight was mobbed by the crowd, and only the actions of a concealed carrier kept this from going very, very bad. Check it out[1]: 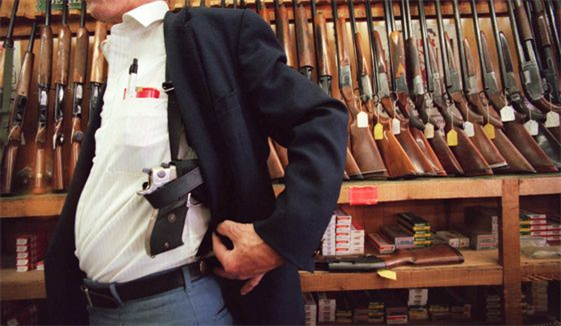 An officer who broke up a fight between two teen boys that had attracted a large crowd at that location was holding one of the combatants at bay when the teen’s opponent attacked the officer, Chitwood said.

“As he breaks up the fight, he takes one kid and then the other jumps [on] him. Now he’s fighting two of them and he’s calling for an assist officer at the same time,” Chitwood said. “There’s a crowd of 40 or 50 kids watching the fight, and they all move in towards the officer.”

That’s when the good Samaritan, who lives on the block, came out of his house with a gun in his hand and told the teens to get away from the cop, Chitwood said.

“He had the gun in his hand, but he didn’t point it at the kids, he just told them to back off,” Chitwood said. “If this guy didn’t come out and come to the aid of the officer, this officer would have had significant problems.”

The 35-year-old gun owner, who has a concealed-carry permit, kept the group of teens at bay until responding officers arrived, Chitwood said.

Not only did the officer who tried to break up the fight suffer significant hand injuries, Chitwood said, but an officer who responded to the request for backup also suffered a major injury to a leg when he was kicked by one of the teens in the fight.

Sadly, young thugs around the nation, egged on by the behavior of the Obama White House, the Justice Department, and Black Lives Matter, feel that they can get away with attacking the police, and have the expectation that they will be able to get away with it.

These mobs expect police officers intimidated by the “Ferguson Effect” to hold their fire and take a beating. They think they can get away with acting like savages.

Concealed carriers and lawful gun owners are a wild card in the mix. Criminals don’t know how a concealed carrier will respond, and they are intimidated by the uncertainty of what a citizen may do.

Law-abiding citizens with arms are increasingly stepping up to defend law enforcement officers from criminals.

Sadly, we can probably expect more of this as the Obama Administration continues to attack law enforcement and excuse the actions of criminals.

As a side note, I’d like to express my gratitude for the Upper Darby Police officers for maintaining their composure as they were being swarmed and attacked by this mob. It certainly sounds as if they were being very close to needing to use deadly force to keep from getting beaten to death.

This is exactly why we do not go anywhere without our guns. You never know when you may need them.