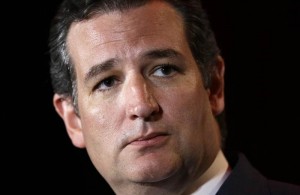 Republicans won a landslide midterm victory running against ObamaCare and Amnesty for illegals. But, give the opportunity to do something about it, cowardly Republicans[3] feared being blamed for a government shutdown more than doing what the American people voted for.

The Hill[4] reports Sen. Ted Cruz, the firebrand conservative freshman from Texas, has blown up the Senate leadership’s plans to have a peaceful weekend by forcing round-the-clock votes on President Obama’s nominees and the $1.1 trillion omnibus.

“Even though millions of voters rose up just one month ago to protest how President Obama and the Senate Democrats were running Washington, business as usual is continuing inside the marble halls of the United State Congress,” Cruz said in a fiery floor speech.

Because of objections from Cruz and his ally Sen. Mike Lee (R-Utah), the Senate will begin slogging through procedural votes on nominees starting at noon Saturday and vote to end a filibuster of the omnibus spending package at 1 a.m. Sunday morning.

“It appears that we’re going to have to have a series of votes all day tomorrow starting as soon as we get here and perhaps into the morning,” Reid said shortly before temporarily adjourning the chamber Friday night.

A senior Senate Democratic aide said the Senate may hold up to 40 procedural votes on nominees this weekend due to what he called the “extreme pettiness on the part of Republicans.”

The plan sets up a final vote on the omnibus at 7 a.m. Monday and confirmation votes on 20 nominees starting Monday.

Sen. Ted Cruz is the thorn in the side of wobbly, chicken shit Republicans afraid to fight Liberalism.