If there was ever any doubt that the leftist zealots who promote political correctness hate America, it should be put to rest as of now. A school recently embraced political correctness and the desire to protect anybody from being offended by banning the American flag – yes, the American flag. Naturally, it did not go over well for those who actually love the country in which they reside…[1] 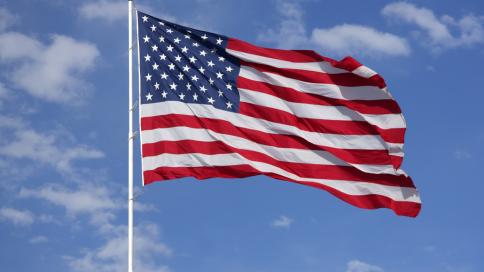 We all know that the PC crowd has lost their minds and some of the things they do to pander and ensure they don’t hurt anyone’s feelings are pretty ridiculous.

What a high school in Colorado did might take the cake for strangest example of political correctness run amok ever.

They banned the American flag.  Seriously.  It didn’t work out too well.

For the sake of “inclusivity” and protecting students from being “offended,” a Colorado high school informed students last week that they were forbidden from flying any flags, including the American flag, in the parking lot. The next day, five seniors decided to stage a pro-freedom of speech, pro-America demonstration, proudly flying Old Glory in protest of the new policy. Following mounting public pressure, the school has since walked back its ill-conceived ban.

The flag ban[4] at Fruita Monument High School reportedly came in response to a student who chose to fly a Confederate Flag behind his vehicle, something school officials deemed offensive to other students. The administration’s solution: ban all flags. Students who disobeyed faced consequences, including the potential to be barred from walking in the graduation.

School officials insisted, rather incoherently, that the real issue was not what flag was being flown, but the resources devoted to “policing” them.

Despite the school’s initial attempt at defending the ban, they’ve since relented, allowing students to fly flags so long as they do so “respectfully.”

What are these people thinking?

First of all, people need to really reevaluate their lives if they can’t handle someone flying a Confederate flag behind their vehicle.

Second of all, how in the world does it makes sense to ban EVERY flag?

Thank goodness sanity prevailed in this situation but it just goes to show you how backwards things are in this country.

We have reached a point of absolute insanity in this country. It is shameful to think that “progressive” ideology has brought us to a point where the symbol of our nation is no longer allowed to fly.

Though they ultimately relented, it’s ridiculous that this was ever even considered, much less adopted as a policy.

It is shameful and any who had any involvement in crafting this policy should lose their jobs.