Her Highness Obama ATTACKS Our Schools AGAIN, With THIS New DECREE…

Do you remember electing Michelle Obama to anything? I sure don’t. Still, for some reason, we are all bound to abide by her obnoxious obsession with telling parents what their kids should be eating and for schools that do not obey Her Highness, stiff penalties await.[1] 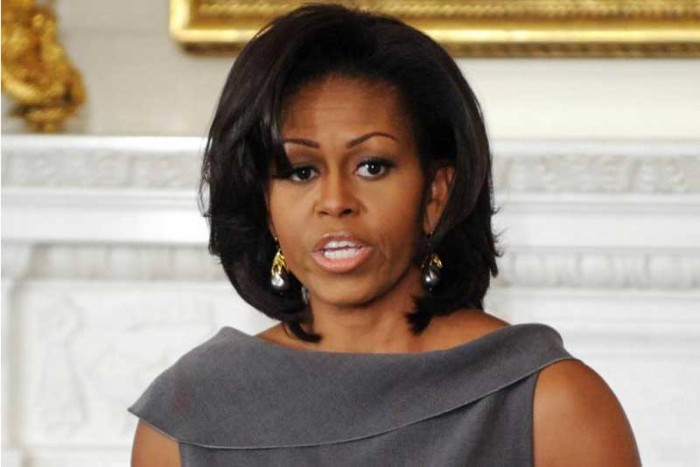 Folks, when I read this story I was just at a loss for words. I don’t know how much more insanity will emanate from this Obama administration but it’s getting really inane. If this story doesn’t set you aflame and give you cause and reason to understand liberal progressive socialism has no place in our Republic — then I don’t know what will.

As reported[3] by the Washington Free Beacon, “The federal government is taking steps to fine schools that do not comply with first lady Michelle Obama’s school lunch rules.

The U.S. Department of Agriculture’s Food and Nutrition Service issued a proposed rule Monday to codify parts of the Healthy, Hunger-Free Kids Act, which was championed by Mrs. Obama.

The regulation would punish schools and state departments with fines for “egregious or persistent disregard” for the lunch rules that imposed sodium and calorie limits and banned white grains.

A West Virginia preschool teacher was threatened with fines for violating the rules by rewarding her students with candy for good behavior in June 2015. The teacher ultimately did not have to pay, but the school had to develop a “corrective action plan” with training on the policies.

The government now seeks to make fines enforceable by regulation. Section 303 of the law requires that the federal government “establish criteria for the imposition of fines” for all the Department of Agriculture’s child food programs.

Do you truly understand what this means? The federal government is using monetary penalty to coerce and force acquiescence to its policy. And worst of all, this policy was not from our elected representatives, but rather a Golf-Foxtrot-India (Good Freakin’ Idea) of the First Lady, Michelle Obama.

So now the First Lady commands, like Marie Antoinette, “let them eat cake” — and if you’re not a student of history, this wasn’t a reference to fine French pastries. It was a reference to the scraps that “cake” up in the oven when bread is baked – that’s how much Madame Antoinette felt about the starving masses.

And so it goes with First Lady Obama’s mandated food nutrition standards. Heck, her “Hunger-Free Kids Act” is about as oxymoronic a title as her hubby’s “Patient Protection and Affordable Care Act.”

If you’ve been keeping up with this, you know much food has been wasted because the kids don’t want to eat it. But, darn you schools, you’ll be forced to pay if you don’t submit. Gee where have we heard that before? Submit or pay? What kind of nation are we living in folks? Is this still America?

And these “fines” — who do you think will be paying for them? Yep, we shall, because it will be passed off to us in increased school bonds in local measures. And what’s up with the Obama administration classification of “egregious or persistent disregard” for lunch rules? The federal government is now making lunchroom rules and imposing financial penalties? Ladies and gents, that verbiage sounds like something you would have heard in the former Soviet Union — what next, teachers expelled to the gulags…maybe that’s what Obama wants GITMO to be used for, a reeducation camp?

With all that’s happening in the world, we don’t need the federal government mandating lunchroom meals — and if you don’t agree, you are certifiably a progressive socialist borderline communist. As a parent, I’m responsible for my child’s eating habits. Angela and I prepared the meals for our girls. And let me ask you a question, those kids on reduced or free meals in schools, wouldn’t it be better to feed them things they like? I say we make sure we have fitness programs that promote a healthier and active lifestyle — oops, better be careful, if a kid doesn’t run that lap, the parents may get a fine notice.

However, now the Department of Agriculture is backpedaling and trying to clean up this mess, “Update Tuesday, March 29 7:23 P.M.: Following publication of this story, a USDA spokesperson told the Washington Free Beacon that the goal of the new proposals are meant to ensure high standards in its Child Nutrition Programs.

“To ensure that entities implementing these critical programs continue to meet high standards of program effectiveness and integrity, USDA is proposing a series of program improvements that address only those programs with systemic and significant program violations, such as theft of funds and financial mismanagement, to safeguard the integrity of Child Nutrition Programs and taxpayer dollars,” the spokesperson said.”

They do not get it folks. They believe they’re justified in issuing a financial penalty for “egregious or persistent disregard.”

Here is what we need to do: bombard the USDA with phone calls and emails at all times of the day for the rest of this week, well, until they recant and retract this socialist rule. George Orwell could not have written this script any better. This is the ultimate example of the welfare nanny-state — the belief that since the government is providing it, we shall mandate it. Yet the progressive leftists go apoplectic with mandatory drug testing of welfare recipients.

Just think, today it’s in the school lunchroom…what happens when they mandate to us all what we should eat and drink? Don’t laugh — you heard about the sugary drink tax? I was just in Philadelphia on Monday; it’s happening there.

The point here is not that kids should be eating fattening garbage. The point of concern here is that we are residing in a country where the First Lady’s failed crusade to make food taste terrible has prompted a pushback and those schools who have rejected this failed idea now must face the wrath of a punitive federal government.

The Founders always feared a strong centralized government and it seems crystal clear in 2016 as to why.