Although putting her foot in her mouth isn’t quite out of character for Hillary Clinton[1]…it seems THIS time, she’s really proven Conservatives and Libertarians alike, RIGHT! 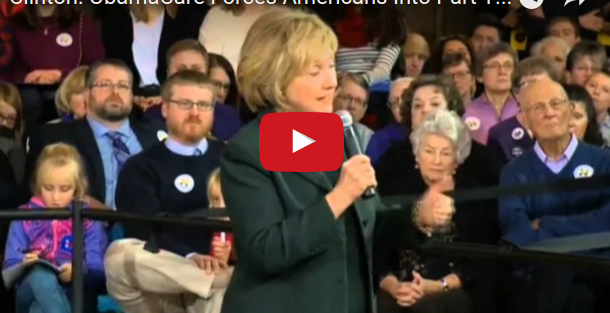 Remember when people warned that ObamaCare was going to hurt workers by forcing companies to cut full time hours? Hillary Clinton just admitted that that’s exactly what the law did…

Well, that’s why they are going to part-time. That, and also, the Affordable Care Act. You know, we got to change that because we have built in some unfortunate incentives that discourage full-time employment. A lot of employers believe if you don’t work 40-hours a week you don’t get benefits and that includes; you don’t get health care benefits; that might include you’re not eligible for the family medical leave; you’re not eligible for paid sick days. So, there is a disincentive in our system that we need to deal with and I really worry about it because there is trend to try and move more and more people into part-time work; and how many of you are part-time workers? And sometimes you want to work part-time, it fits into your family, it fits into your life obligations but sometimes you want to work full-time but you can’t get a full-time job. So, I want to look at all the employment rules.

Instead of admitting a screw up, she pivots to talking about “fixing the system.” What system?! What freaking system? Business owners run businesses. They should be able to hire who they want and pay what they want. If people don’t like the offer, they work for another company. The only “system” that has screwed anyone here is the one which Democrats have put in place.

Democrats like Hillary Clinton want to think up new ways to punish and force small businesses to pay more than they can afford. In the long run, what do you think that does for both an economy and healthcare?

Here’s a video that gives us some insight on what it’s REALLY like in Canada when you need to see a Doctor…the truth is unbelievable.

The comparison to Canada was all a lie, and now Obamacare is here.