Let’s talk about the real war on women… One of the biggest supporters of the oppression of women around the world seems to be Hillary Clinton and the Clinton Global Initiative. 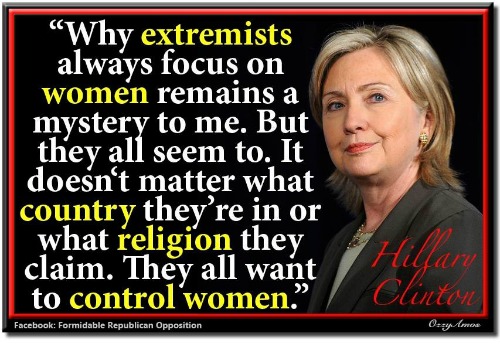 United Arab Emirates – systematic torture and the forced labor of migrant workers are what this country have become best known for, and the UAE contributed between $1-5 million to Hillary Clinton’s foundation.

Saudi Arabia – a nation operating under Sharia Law (with its terrible treatment of women) with an estimated 30,000 political prisoners has contributed $10-25 million to the foundation since its inception.

It is sad that one of the biggest “advocates” of women rights around the world is accepting money from countries and people who have committed such egregious actions against women. Way to set the example Hillary! She seems to care as much about the truth as much as she cares about women’s rights.