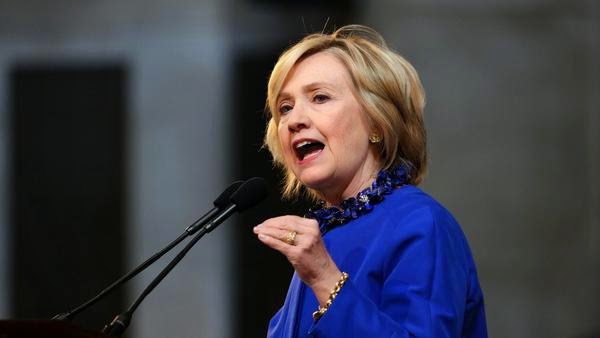 There was absolutely nothing new offered by Hillary Clinton[1] in a speech she gave today at Columbia University. Every word out of her mouth has been uttered before by every Democrat candidate to an urban audience for the past 40 years. Failed liberal policies that she believes in are neverendingly recycled because Democrats are never held accountable for them.

LA Times[2] reports Hillary Rodham Clinton focused her presidential campaign Wednesday on the unrest in Baltimore, vowing to work to upend the criminal justice system by ending the “era of mass incarceration” and equipping every police officer on the street with a body camera.

Her speech at Columbia University in New York City marked the unveiling of Clinton’s first major policy proposal as a presidential hopeful, coming as candidates are under pressure to confront racial disparities in the criminal justice system highlighted by the violence in Baltimore.

Riot-scarred Baltimore: A concert and afternoon baseball in an empty park

Riot-scarred Baltimore: A concert and afternoon baseball in an empty park

“What we have seen in Baltimore should, and I think does, tear at our soul,” Clinton said. “The patterns have become unmistakable and undeniable. … We have to come to terms with some hard truths about race and justice in America.”

Baltimore erupted in rioting Monday night, following the funeral of Freddie Gray, an African American man who was mortally injured while in police custody.

Clinton’s plan also stems from the “listening tour” she has been on since launching her campaign this month. In round-table meetings with residents in the early ­voting states of Iowa and New Hampshire, the issue of drug abusers whose troubles were compounded by mental health problems played prominently.