Pro-abortion group EMILY’s list[1], whose base has grown significantly since Hillary’s ’08 campaign, is getting behind the female Clinton in an effort to make Washington D.C. pro-choice and female. They are pumping a lot of money into the upcoming elections, supporting ONLY pro-choice, females in the interest of pushing their agenda. 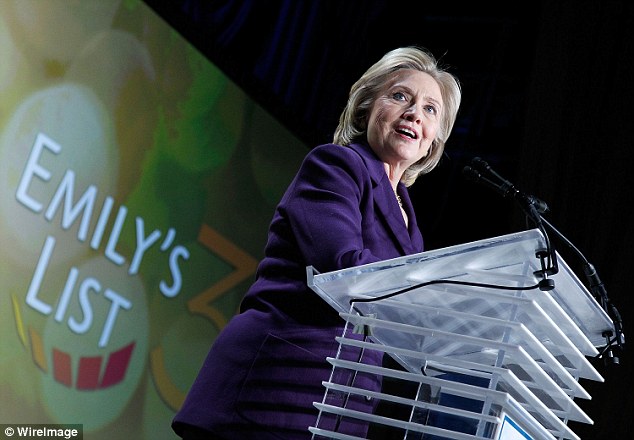 Hillary Clinton has a secret fundraising weapon in the 2016 election for president that could significantly boost her numbers, and it’s not her husband, former president Bill Clinton.

It’s the 3 million women affiliated with progressive activist organization, EMILY’s List, which has grown its membership by five times since Clinton’s 2008 run and doubled its donors.

Founded on premise of protecting abortion rights, EMILY’s List will only support female candidates who are pro-choice.

It has already endorsed Clinton for the White House, as she’s the only woman running who backs abortion, and is on track to raise more than $60 million this election cycle for her and other female candidates running for office from across the country

‘Hillary Clinton is by far the most qualified person to be the Democratic nominee, and she just happens to be a woman,’ said Marcy Stech, EMILY’s List Communications Director.

Stech said Clinton has a record ‘second to none’ of championing causes that benefit women and families.

‘It’s clear that the country’s ready for it. It’s the right time, and she’s the right candidate,’ she said.

The more than $60 million that EMILY’s List plans to raise for the upcoming cycle comes through its independent expenditures, including its Madame President project, political action committee and bundling for chosen female candidates.

In 2012 it raised more than $52 million. It increased that amount to more than $60 million in 2014. Now, with Clinton expected to be at the top of the Democratic ticket, EMILY’s List is energizing and broadening its base of donors – and female candidates – like never before.

Call it the ‘Hillary effect,’ if you will.

EMILY’s List is hesitant to slap that label on its latest round of recruits because it’s been grooming many of the female candidates it’s supporting this cycle for years now. But it admits that Clinton’s presumptive nomination for president has inspired its members to seek elected office, as well.

‘Our members and candidates are excited about Hillary,’ Stech said, in no small part because Clinton is talking about the issues their candidates ‘care so deeply about, and they can often speak from their own personal experience of balancing family, work and economic challenges.’

Clinton has made traditional women’s issues such as paycheck fairness, paid sick leave and access to preventative health measures, in addition to continued health insurance coverage of birth control under Obamacare, central themes of her campaign.

EMILY’s List didn’t set out to fight for those issues when founder Ellen Malcolm, an alumnae of Jimmy Carter’s administration and the multi-partisan National Women’s Political Caucus, and two dozen like-minded women planted the organization’s first seeds in 1985.

Back then, it was focused solely on funding pro-choice women’s bids for elected office. Malcolm’s theory was that ‘Early Money Is Like Yeast’ (EMILY) – it makes the dough rise.

If this doesn’t tell you all you need to know about Hillary Clinton, then you’re beyond help.
Endnotes: