It seems 2016 presidential-hopeful Hillary Clinton’s campaign is getting off to a rougher start than the mainstream media is reporting.[1] 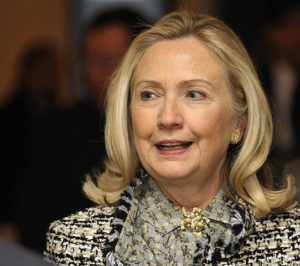 Democratic Presidential candidate Hillary Clinton’s rally in New York Saturday could only bring out six people, which included a staffer, to an Iowa watch party in the town of Marshalltown, CNN reporter Jeff Zeleny described. Clinton is expected in Iowa on Monday.

Zeleny wondered if Clinton’s remarks could fire up her base further, while CNN anchor Fredricka Whitfield described the watch party as “pitiful” looking.

Clinton reiterated to supporters at her campaign re-launch rally on Roosevelt Island in New York City that she was targeting the Supreme Court’s Citizens United Decision, among other issues.

Naturally, all the public has heard from the media is how many supporters went to Clinton’s New York speech. But, hardly any media outlets are reporting Clinton’s support in states outside of New York.

Clinton is already down in polls in Ohio, Iowa and Arizona. But, the public will be told for the next year how loved and supported Clinton is around the country, when truthfully, she’s only popular among old liberals.