Maybe the coronation of Hillary Clinton as the Democrat nominee in 2016 isn’t inevitable after all. In 2008 she was pushed out by an upstart community organizer, but in 2016 it might be her own words and overfamiliarity[1] with “The Clinton Way” that do her in. 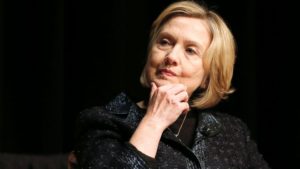 A CBS News poll released Thursday found that just 26 percent see her favorably, compared with 37 percent who don’t. The rest, about one-third of those polled, haven’t made up their minds.

Unsurprisingly, Clinton’s ‘unfavorable’ numbers are high among Republicans, registering 78 percent. Barely half of Democrats, though – just 55 percent – say they hold favorable views of her. That number is down 8 points since November 2013. Across the entire voting spectrum, Clinton has lost 12 points of support in the intervening 16 months.

Her high-water mark in the CBS poll came just two months after she took over the U.S. State Department in early 2009, when 58 percent of Americans said they liked her. But the wheels fell off shortly after she left the Obama administration: When her memoir ‘Hard Choices’ his bookshelves, her favorability number bottomed out at 24 percent.

The most recent survey, conducted March 21-24, shows she’s barely rebounded since then.

On balance, Clinton’s biggest hurdle may be her own words, stretching back into the 1990s when she was America’s first lady. Forty-seven percent of the people CBS polled said they don’t believe she is ‘honest and trustworthy’ – 5 percent more than the number who came down on Mrs. Clinton’s side.

The poll didn’t take into account Hillary’s assessment that we have a “fun deficit” in America and her recommendation that we establish fun camps for adults. That might have been a game changer, for sure.