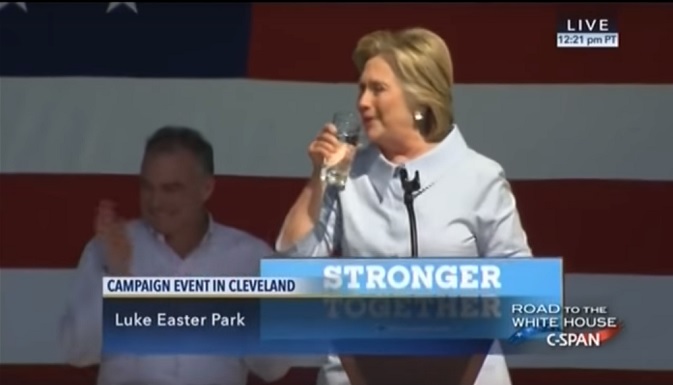 Don’t get me wrong – I am deeply troubled by the fact that clueless Americans twice elected a man who adamantly refused to be transparent about his past. But where, exactly, he was born always struck me as a minor issued compared to his treasonous behavior and criminal violations.

Some are contending that Americans’ speculations concerning the health of Hillary Clinton is another “birther”-esque conversation.

Whether our potential next president is physically (and mentally) fit to hold our nuclear launch codes is a matter of extreme importance.

While we shouldn’t expect Hillary to demonstrate the vitality of a 21 year-old, her coughing fits and the presence of a mysterious handler have led some to speculate that she is, in fact, sick.

You know, aside from the sociopathy…

In the below video of her event in Cleveland this week, Hillary has yet another coughing fit. However, the traitorous presidential candidate appears to be coughing up something into her glass.[2]

Though it’s a bit gross, check it out and judge for yourself: Is Hillary sick?

Now, we should question whether she has the strength, stamina and mental fitness to lead…

The below tweet shows the nauseating hacking. The video below shows the whole episode.

The fat sociopath is spitting out part of her lung in the glass!!!!!!