Hillary Indictment May Be Coming: Former Clinton aide may still be charged over email system 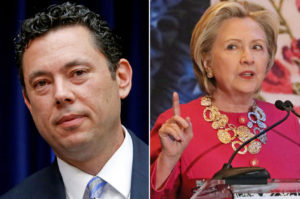 With all the noise coming from the corrupt media machine about Russia, Michael Flynn, and the reaction to Trump’s masterful presser, the significance of this story is huge! Like I wrote on this blog a few days ago, if Democrats keep talking Trump impeachment, the GOP will push [2]to indict Hillary Clinton. And lo and behold this story breaks today. Does anybody think if they bring criminal charges on Hillary’s IT guy that it will stop there? This would be step 1 to going after Hillary because Bryan Pagliano will not take the weight by himself. And that’s if he stays alive.

NY Post[3] reports the Republican chairman of the House Oversight Committee is pushing the Department of Justice to slap criminal charges on an aide who helped maintain Hillary Clinton’s private email system.

Rep. Jason Chaffetz (R-Utah) sent a letter this week to the newly sworn in attorney general Jeff Sessions, demanding that Bryan Pagliano be brought “before a grand jury” or be charged.

Pagliano, a former State Department senior advisor during Clinton’s tenure there, ignored multiple subpoeanas calling on him to testify before the House Oversight Committee.

“Because Pagliano’s job functions included supporting mobile computing issues across the Department, he was uniquely positioned to answer questions regarding State Department policies and practices for preserving records, as well as the technological procedures utilized to do so,” the Feb. 16 letter to Sessions reads.