This woman is the embodiment of the entitlement mentality. Her campaign was not built on the message of “I want to earn your vote,” it was closer to “It’s my turn, gimmie!”

The way she voted shows this without the shadow of a doubt. People have been waiting in line for HOURS to get into a polling station to cast their ballot, but not Hillary. 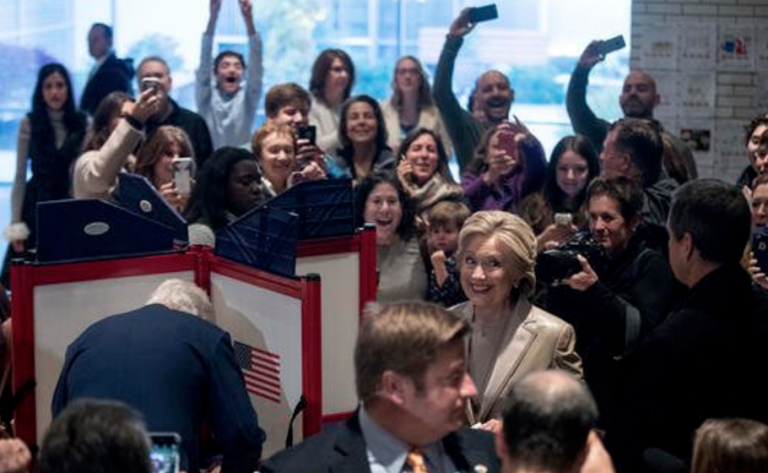 As people took pictures of Bill and Hillary Clinton made their way to the polling station to cast their Presidential ballots, the rest of us who are not rendered speechless by her presence noticed that she did something extremely rude.

Hillary Clinton made her way to the front of a long line of voters waiting patiently to cast their ballots. Waiting her turn is beneath her, I guess.

I get that it could be a risk to allow her to stand in the line, being that it gives someone who is off their rocker the time needed to do something really bad, but at the same time it doesn’t exactly scream, “I’m a woman of the people,” if you’re being treated like royalty right in front of them.

Look at the faces of those voters. They’re completely taken with the fact that Hillary Clinton is there and aren’t even aware of the fact that she’s being extremely rude and – dare I say it? Unfair? The HORROR!

This woman absolutely should not be President. She’s always been “me first” and doesn’t care about anyone around her.

If you haven’t already, please get out and vote. I won’t tell you who to vote for, but you need to vote.