A-hole Scratches This HORRIBLE Word On Side Of Veteran’s Truck – Guess What Happens Next? 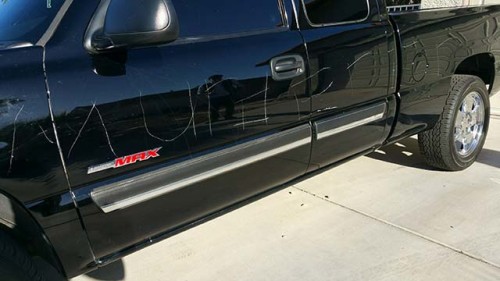 Disrespect for our military [2]is at am all time high among the Liberal Left. And they don’t hesitate to show their disdain with cowardly acts of vandalism like this one. This man proudly served our nation and this is the thanks he receives for it. What would you do if this was your truck?

KVVU reports that someone scratched “murderer” on the side of a Henderson, Nevada veteran’s truck. Livio Waits served for ten years as an Army sniper including tours of duty in Iraq. He woke up Thursday morning to find the offending word carved into the paint of his black Chevy truck. The damage got every single panel on the driver’s side of the vehicle.

At first, Waits wasn’t sure what to make of this vandalism.

“I didn’t even put it together what the word meant at first, but then it all just hit me like a wave,” Waits said.

Waits has veteran’s license plates and believes he was targeted because he served his country. He said it was hard to believe someone could do this to him considering he put his own life on the line to defend the vandal’s freedom. He added that he fought so others could speak their mind, but was heartbroken that they decided to label his sacrifice as murder.

“My mind went blank. When you look at it, it’s so hard to actually accept that it’s real,” he said.

The veteran made the astute observation that the vandal was engaging in the same kind of terrorism that he fought to protect this country from.

“You know the word. I’m not easily offended. I don’t get messed up too easily, but this one hit me pretty hard,” Waits said.

This American hero thinks that someone who opposed the Iraq war or possibly a terrorist sympathizer is responsible for the hateful vandalism. Waits however will not let this cause him to doubt his contribution to preserving our democracy.

“I’m not going to stop showing my pride for what I’ve done. It’s the best thing I’ve ever done,” said Waits.

Livio Waits is an American hero. The person who vandalized his truck is a coward. Heroes sacrifice so cowards can live. Thank you Mr. Waits. Your service is not unnoticed by true patriots.