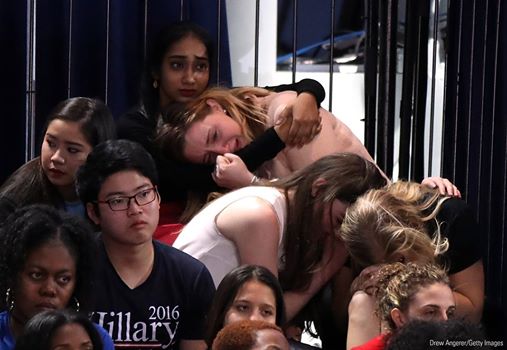 I have spent the last ten hours of my life glued to the television. I was a #neverHillary girl. The thought of that woman representing me, my gender and my gender was literally nauseating. But I didn’t have a great deal of hope. I was torn between a third party vote and Donald Trump. But the media made it seem impossible for Donald Trump to win this election.

They were wrong. Donald Trump has been elected as the next president of the United States of America. The people have spoken and they were not quiet. An election that was predicted to be a clear victory for Hillary R. Clinton came out in favor of the underdog. And everyone was shocked. It is historic.

But the best reactions are definitely coming from our buddies in Hollywood. Twitter has been on fire with the anger of the stars. As the votes came streaming in, they were filling the twitter world with their anger.

If you care about the future of your country, and your polling places haven’t closed, go vote now. Trump is winning nationally. I’m scared.

Misha Collins, actor from the show Supernatural, was vocal. He begged his followers to get out and vote before it was too late. But for him and all his followers, it didn’t seem to do much good. Donald Trump has accepted the presidency. You can keep talking, but it won’t change anything.

The tweets didn’t end there.

someone give me hope

How exactly does California go about seceding?

So, where does this leave us? We stand at the precipice of a new era in government and politics. The people have spoken. They aren’t happy with the last eight years. They are not okay with what has been done to their country.