We are currently residing within a country where instead of being outraged that Planned Parenthood is chopping-up babies in order to sell for profit, Democrats are targeting the whistleblowers for investigation. Society is becoming more and more savage and nothing illustrates this fact more than a note left on a poor animal.[1] 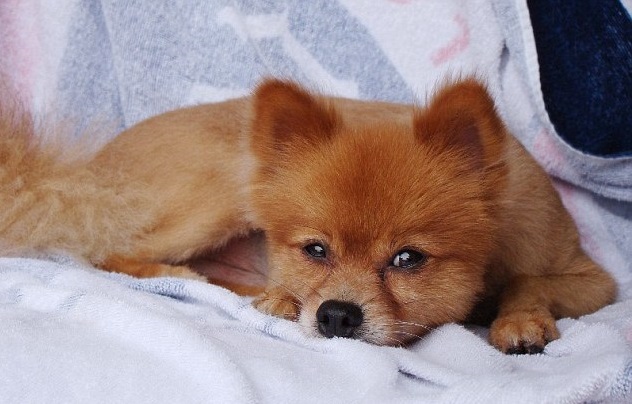 A family has spoken of their horror after they found their missing Pomeranian lying dead outside their home with numerous traumatic injuries and a note reading: ‘We beat it 2 death lol HAHAHA!’

Ronald Boisvert and his girlfriend became concerned when their pet dog, called Fox, went missing last Friday after they let him out to exercise on a grassy area outside their Florida townhouse.

The following morning, their worry turned to devastation and repulsion after their ‘frantic’ neighbor arrived at their door and told them their pet had been returned to them – in a truly shocking way.

The owners walked to their back porch to find the broken body of their beloved dog dumped on it, alongside a sickening note saying Fox had been beaten to death by the writer and their friends.

The note concluded with a smiley face and the words, ‘laugh out loud’, and, ‘HAHAHA!’

‘I saw the note and it was horrifying, I started crying,’ Mr Boisvert’s girlfriend, Verline Barthelemy, told WSVN[3] on Tuesday. ‘If someone can do that to a dog, imagine what it could escalate to. ‘

Mr Boisvert added: ‘I was devastated. He was a very friendly dog.’

In a bid to discover what had happened to their pet, Mr Boisvert, Miss Barthelemy and their four-year-old son took Fox’s body to a local vet, who determined that the dog had been kicked to death.

Dr Ron Ridge, who works at Saint Francis Animal Hospital in Pembroke Pines, told the owners their 13-year-old pet had suffered 10 cracked ribs, missing teeth and a broken spine in the brutal attack.

‘If the note was indeed true, somebody really meant to kill that dog,’ Dr Ridge said, adding: ‘To be hit with a stick you’d have angular injuries. The injuries were on the flat side of the body.’

Despite the vet’s findings, officers say they have not ruled out the possibility that Fox was struck and killed by a car – and that the person who wrote the note was lying about having beaten him up.

Either way, Miss Barthelemy said she had been left devastated by the note and Fox’s death.

‘Fox was like one of my kids. It hurts. It hurts,’ she wept.

The grief-stricken woman was apparently cooking when she decided to let Fox out to exercise on a grassy area outside her and Mr Boisvert’s condominium in Pembroke Pines on Friday afternoon.

The couple would allow their pet dog to run around the grass daily, but would only let him out of their sight for a couple of minutes at a time. This, however, was all it took for Fox to vanish on Friday.

Mr Boisvert and Miss Barthelemy remained hopeful that Fox would return safely to them when their neighbor discovered their missing dog’s body, with the horrific note placed on top of it, on Saturday.

Fox was covered in reddish sand, similar to baseball field clay, and Mr Boisvert said there is a field near his condominium. He added that he does not know why anyone would want to hurt Fox.

However, he said he thinks the culprits are local because Fox was not wearing a collar, yet was returned to his family home. ‘The only way you would know is if you’d seen him before,’ he said.

Police told CBS that they believe the apparent beating is isolated in nature.

Alternatively, they can contact Crime Stoppers anonymously at (954) 493-TIPS.

There is a special place in hell for these people.

It’s hard to stay positive in a world where this could happen. I sincerely hope police discover who is responsible and I think many of us would be comfortable with a return to old-school police “interrogation techniques” in this special circumstance. 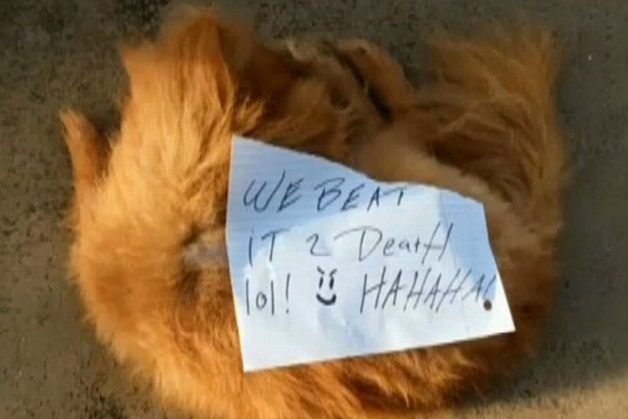