All the media talks about is white on black crime. The issues of violence happening inside the black community with black on black crime (the most prominent type of crime) are never discussed.

So it’s horrifying to watch this video below[1] which shows a group of female thugs attacking a pregnant woman as she screams “My baby!” and they scream back “F*ck your baby!” 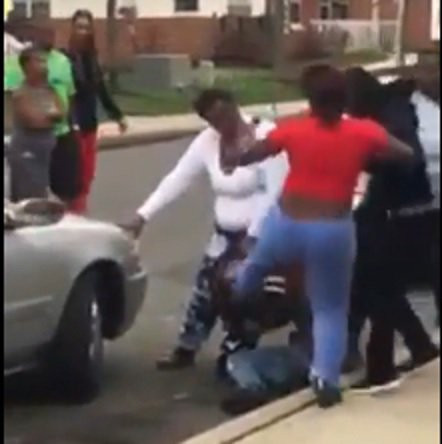 As the clip ends, there is no indication that police are in the vicinity or that any bystanders intend to contact them.

Mirror online have contacted Camden County Police – where the shocking incident is believed to have occurred , and are awaiting comment.

Last year, the troubled city in New Jersey had the dubious distinction of being the ‘most dangerous city in America’.

The violent crime rate in the small city, just across the Delaware river from Philadelphia, is six times the national average.

The saddest part about this is that these are the kind of incidents that happen in a country run down by Democratic control where there is no respect for human life and no opportunity available for the disadvantaged.

There’s a culture of violence within the black community, but it never goes talked about by Al Sharpton or President Obama.