Bullying only counts when Gays, Tran 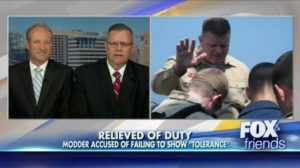 [1]sgenders, and other garden variety freak-a- ziods are the victims. But, when the tables are turned and it’s them trampling on the religious rights of Christians it’s applauded by a corrupt media.

Fox News[2] reports a decorated 19-year Navy chaplain could be kicked out of the service for his faith[3]. Now, he’s fighting back for his right to serve.

Lt. Commander Wes Modder and Kelly Shackleford, president and chief counsel of the Liberty Institute, appeared on “Fox and Friends” this morning.

Modder said that the complaint against him was that he was insensitive and intolerant of people who didn’t share the viewpoints he held as a Christian minister.

He explained that his administrative assistant, a married gay officer, was upset about his views on same-sex relationships and wrote a five-page complaint documenting grievances against him.

Modder was accused of failing to show “tolerance and respect” in private counseling sessions regarding issues pertaining to faith, marriage and sexuality.

Shackleford said he got involved because Modder is in trouble simply for believing what his faith tells him is true.

“He did exactly what chaplains are supposed to do, which is minister to people and answer questions and one-on-one counseling of what the Bible says, of what their faith says,” Shackleford said.