How small fish can create a big problem: Release them into the wild

I can see it now.  Some family can’t take care of their fish anymore and instead of dispatching those former pets to the next realm, they release them into a local stream, pond or lake.  A small little gold fish can’t have an effect on such a large body of water though, can it?  Well, yes, it can.[1] 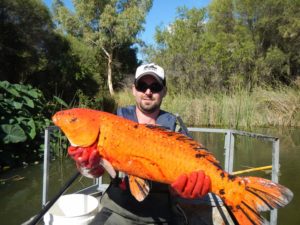 “Scientists have noticed something strange in the waters of Western Australia.

Goldfish and koi owners who have dumped their fish in the wild have done much more harm than good to the environment, as these more hearty fish have grown to large sizes and fed off of native fishes.

The ecological harm may not be intentional, but it’s happening.

“They’re dumping them into a man-made lake, say, in a housing estate, and they think, ‘What’s the harm? At least it will have a nice home and I don’t have to look after it,’” he said. “They are eating up the food resources and using up the habitat that our native fish would otherwise be using.”

A big fish in a small pond.

The goldfish and koi also have a higher chance to transmit diseases to native fish.

This can happen anywhere, not just Australia. So don’t release your pet fish into the wild.”

Last thing I need when I am out fishing for trout or bass is a mutant goldfish stealing my bait or worse my catch! I hear goldfish and koi don’t make good eatin’ either.