An African American student at an Arizona high school is crying to the media after being told she wasn’t allowed to wear her “Black Lives Matter” T-Shirt in school — especially on picture day. 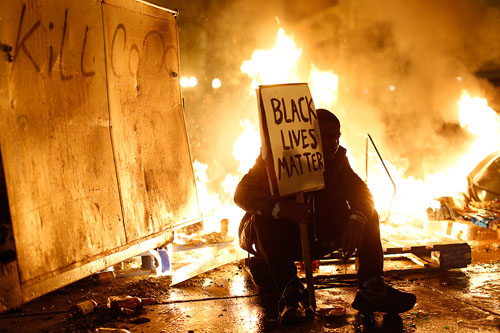 As The Blaze reports[1]:

But instead the 10th grader got the dreaded call to the office where the administration said her T-shirt wasn’t appropriate.

“I wasn’t able to wear the shirt anymore because somebody made a complaint,” Havard told KPNX-TV. “I was a little bit confused as to why I wouldn’t be able to wear something so meaningful to me.”

A few days later an Hispanic student tried the same trick and was also told she can’t wear a T-Shirt that might lead to “disruptions” during the school day.

“I felt like I was being punished for who I am,” the girl told the media.

Yeah… where were these girls who are all worried about free speech and “being who they are” when other students were being told[2] they aren’t allowed to wear T-Shirts with the American flag[3] on them or a drawing of a gun[4] on them?

Bet they were totally silent then, eh?

But what do you think? Were these girls’ “rights” violated?