The HULK Challenges ISIS: Giant Bodybuilder Announces He Will Take Up Arms To Fight Islamic State

While President Obama dilly-dallies and pretends that ISIS is not a serious problem, the rest of the world knows differently. One man, an Iranian bodybuilder, is so convinced of the danger of ISIS that he is volunteering to fight the savage scum.[1] 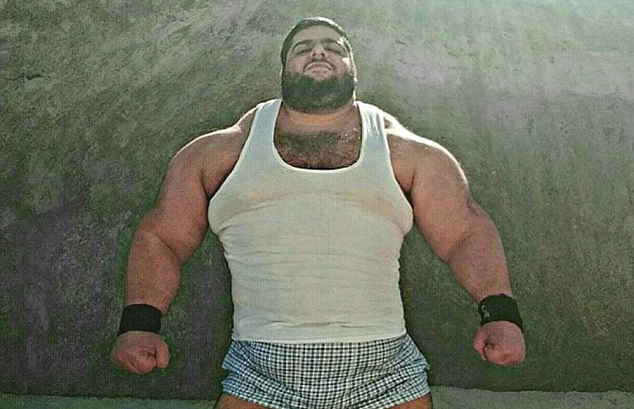 A weightlifter dubbed the Iranian Hulk will take to the battlefield to fight ISIS[3] as a volunteer soldier.

Sajad Gharibi, 24, from Iran, is said to weigh nearly 24 and a half stone and almost all of it is muscle.

He announced on social media to his 127,000 followers he is joining Iranian forces fighting ISIS extremists occupying Syria[4].

Gharibi puts much of his size down to genetics, but because of his frame he has had to deny ongoing rumours he is the executioner for ISIS known as The Bulldozer, according to 9 News[5].

Little is known of the Iranian Hulk’s personal life, but ending the terrorists’ regime in war-torn Syria is said to be close to his heart.

The giant man with a fierce expression has a cult following on Instagram[6] where he posts about what he does best – weightlifting.

But his Instagram account doesn’t feature the type of food and workout posts most weightlifters and workout obsessives share, instead it displays an array of gobsmacking topless photos of himself and unpretentious pictures of him going about his day to day life.

His huge frame and bulging muscles have earned him the name of Hulk or Hercules.

He can lift more than 180kg, which is more than he weighs, and competes in the powerlifting category of competitions.

He has also participated in bodybuilding competitions representing his country.

Since getting gaining a following on his social media accounts, the Persian Hercules has quickly become an internet sensation as netizens express their amazement at his impressive build.

He writes in Persian but uses English hashtags such as #strongman #strongbody #big #mucsles and #powerful.

In his free time, Gharibi also likes to take pictures with objects that look smaller when held next to him.

In one photo he sidles up to a can of Fanta orange, in another he poses with a can of Red Bull in a shop and in another he wraps his enormous arm around a normal sized friend.

While this young man takes his impressive might to the battlefield, our president, equipped with the most-formidable military in the history of mankind, is thoroughly unwilling to use it in any meaningful way to combat those who swear that it is their duty to God to kill those of us in the West.

Evidently, our Commander-in-Chief is too busy inviting crossdressers and transsexuals into the military to fight a war.