Hillary Clinton had no qualms in taking her beef with the F.B.I., straight to her supporters on Saturday. She ranted on about how Director James Comey has opened up the investigation on her email scandal[1] and referred to it as ‘unprecedented’, among other things. 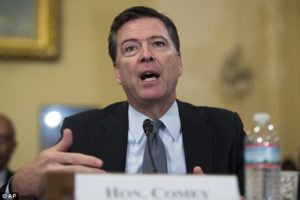 She took Comey on, one-on-one a day after he discharged a letter announcing that the bureau was investigating new emails affiliated with its other investigation into the former Secretary of State’s private server.

Hillary was speaking to her supporters in Florida without Huma by her side this time, as she was laying low in her home in New York. This must have been protocol since the information that broke came directly from the phone device of her husband, Anthony Wiener, who was already under investigation by the FBI for his recent sexting scandal with a minor.

It would seem that this blow to the Clinton campaign is brought to the American people by none other than the pervert himself. Now what were the chances of that happening? Will Wiener be the final straw that breaks Hillary’s bid for President?

According to her, she seems confident she’ll make it through:

‘If you’re like me, you probably have a few questions about it,’ Clinton told a crowd of about 900 at a community center. ‘It is pretty strange. It’s pretty strange to put something like that out with such little information, right before an election,’ Clinton said.

Of course the crowd booed at the first mention of the FBI’s move to reopen the case.

Clinton first went after Comey on Friday when the news broke that Wiener’s phone contained details that were not handed over for the email investigation.

‘Voters deserve to get full and complete facts. And so we call on Director Comey to explain everything right away.’

‘Put it all out on the table.’ She continued.

Arrogance as usual. YOU, Hillary, do not call on the FBI. They don’t work for you.