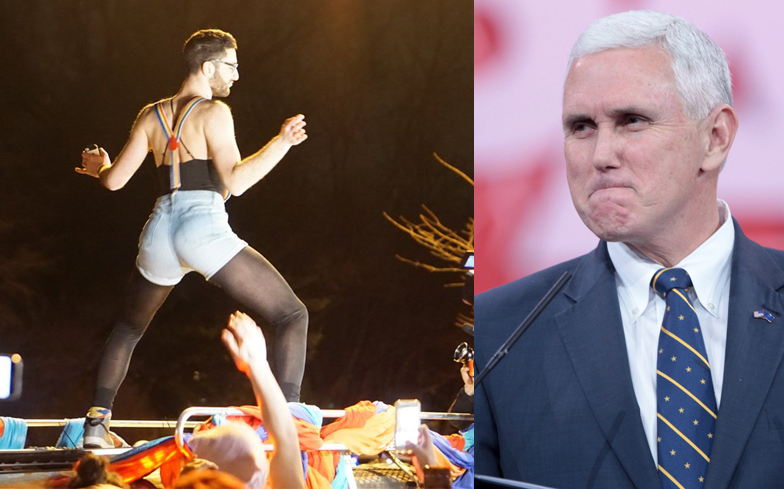 The LGBT community has been on one since they learned Pence became Trump’s running man.

Why? Well it could be because Pence said in a speech… “societal collapse was always brought about following an advent of the deterioration of marriage and family.”

He has also said that being gay is a choice and keeping gays from marrying was not discrimination, but an actual enforcement of “God’s idea.”[2]

He defines marriage as being between a man and a woman.

I happen to agree with him on all fronts.

Here’s the thing. Does that mean that there exists in Pence or anyone else who believes the same, a hatred for anyone who is gay? (There are some crazies…out there. Pence is not one of them.)

No. It does not. This idea that marriage is between a man and a woman transcends beyond any type of hate or discrimination…in fact it’s not about that at all.

It is about the plan of God.

The disintegration of the family unit as God has created it to be, breaks down society…but hey, even though it’s not a personal kick to the gut like members of the LGBT community feel it is, I can understand how it’s hard for them not to take it personal.

Still, just like it’s important for them to be who they think they are, it’s important to those that understand God’s plan NOT to turn their back on him … even if it means you’ll have 100s of gay people having a dance party nearby just to be obnoxious…because although they are allowed to be loud and proud, YOU have no right to your own beliefs?

Check out what these fools did to Pence. Jokes on them… he couldn’t care less how ‘stupid’ they want to be, because again, it’s not disgust, it’s about right and wrong to him.

If this video of @werkforpeace[3] organizer Firas Nasr leading the protest doesn't make you want to become a political organizer, nothing will. pic.twitter.com/tBHiRMOsa4[4]

"We are here / we are queer / we will dance" chants at #LGBTQ[6] dance party outside Mike Pence's house on his last night living there pic.twitter.com/N4ZkQVF8qB[7]

Here’s a quote from one of the party goers…

“Our use of dance is really about claiming space and asserting #WeAreHere and #WeWillDance,” Nasr said.

Knock yourselves out, dance, dance, dance…. it will change nothing. Love you, but can’t agree with you, nor can we ignore the plan of God to keep your feelings from being hurt. That’s all on you.

I will give the shirt off my back to serve my friends and family who are gay. I will feed them when they are hungry, clothe them when they are cold, shelter them when they have no where to go, take names of those who harass them for being different and hand out some knuckle sandwiches, because I love them.

I just cannot turn my back on God and him ordaining marriage to be between a man and a woman.

It’s that simple. Instead of hate…just point a finger, laugh at “the crazy believers” and you boo, but to expect us to go against something we feel is important to our very salvation?

Well that’s just far too much to ask.

Sending out prayers for peace despite these differences.