Women loyal to President Assad in a besieged region of Damascus are being paraded in metal cages i[1]n the hope of preventing further air-strikes raining down on a stricken suburb of the Syrian capital. Women becoming very literal shields and put at risk….without a second thought.

Almost 500 Alawites – male and female – have been rounded up by Army of Islam militants and are now being held captive in the cubed jails mounted on the back of flat-bed trucks and pick-ups.

The city of Douma has been pulverised by daily attacks by Russian and Syrian bombing raids.

However, the locals see this extreme retaliation as the only way of ensuring the airborne attacks are ended – as it would mean President Assad targeting his own supporters.

At least 100 cages are now being used to ferry the hostages around the city, in the Eastern Ehouta region.
Videos of the trucks have been shared on YouTube and clearly show terrified women helpless inside the thick metal fencing. 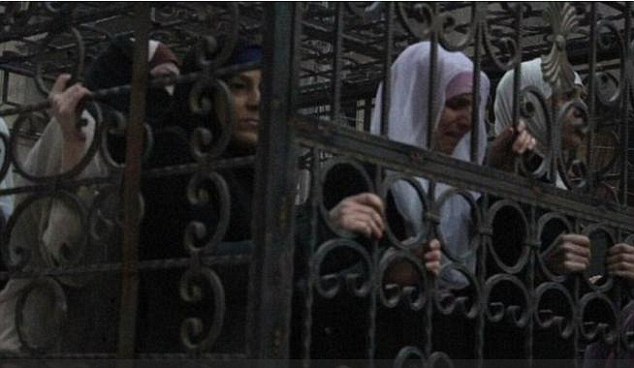 Panicked men are also seen asking to be released from their enclosures.

However, the rebel groups continue to parade the trapped hostages, driving through streets where dozens of buildings have been reduced to rubble by bombing campaigns.

One woman, Mervat Ali, from Qardaha, can be heard saying: ‘We wish that the Russian warplanes never shell civilians again.

‘We are experiencing fear here with the people.’

Humanitarian group Médecins Sans Frontières (MSF) have confirmed that at least 70 people were killed and 500 injured in a series of horrific air-strikes against Douma on Friday. 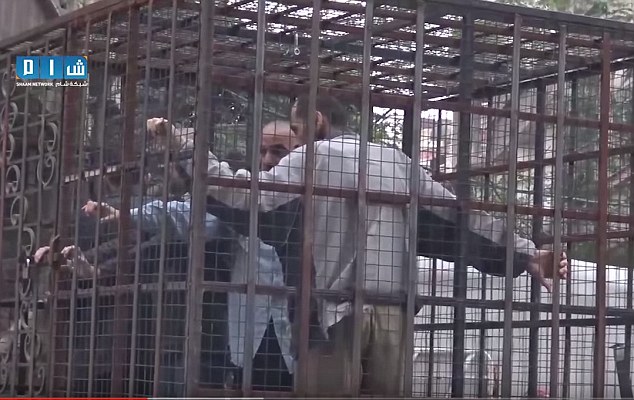 The group’s principal hospital was also hit in the attack, with a further six people killed by shelling on Monday.

Strikes against Douma killed 550 people during their peak in August. More than 120 of those who died were children.

Human Rights Watch slammed the latest action by rebels on the ground, alleging that similar caging tactics were used in the Shia village of Fue, in the north of the country, last month.

‘You can’t protect civilians by endangering other civilians.’

He added: ‘There has to be real action by international actors.’