‘I didn’t want to give up’: Eight-year-old Amputee Performs Heartwarming Dance Solo One Year After Losing Her Leg In An Accident

A young Utah girl’s determination in the face of adversity is inspiring everyone around her – and now thousands of strangers as well. Alissa Sizemore lost her leg last year in a truck accident, but the young dancer refused to let that be an obstacle[1] to her dreams. Her first performance with – and without – her prosthetic leg is simply amazing. 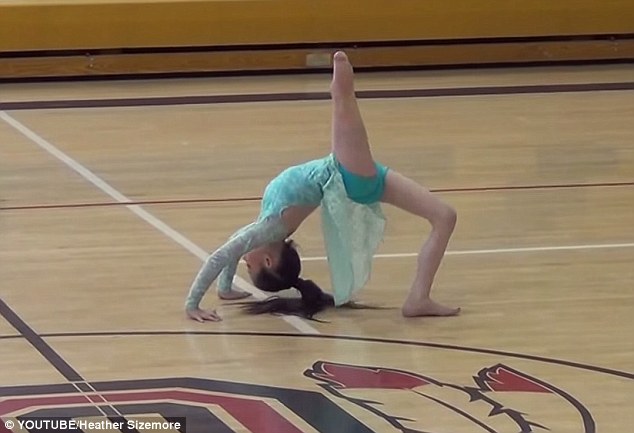 ‘I just didn’t want to give up,’ Alissa told People. ‘Dancing has been my favorite thing since I was four. I don’t have part of my leg, but I can’t let that stop me. I still want to dance.’

Alissa, who was fitted for her prosthetic leg in September, chose Colbie Caillat’s hit Try, a song that she and her mom felt accurately reflected her emotional journey over the past year, for her debut performance, in which she removed her artificial limb as a part of her routine.

After removing her artificial leg, she continues her routine on the floor, proving that she will always be able to dance – with or without her leg.
The teary-eyed audience was so moved by her dancing that she was given a standing ovation – a fantastic end to an emotional year.

And one which will hopefully help to dull the memory of the horrific accident which left her in pain for months.

Last May, Alissa was playing outside with her sister Cyley, 10, and some of her friends when she ran past a few garbage cans that were pulled to the curb just as a truck was breaking to a stop. Alissa’s right foot was pinned underneath the tire.

She was immediately flown to Vernal to Primary Children’s Medical Center in Salt Lake City, but doctors were unable to save her leg.

When her mom took her and her sisters to Powerhouse Dance Studio last summer for fall tryouts, it was thought that Alissa would help with the music until she was ready to return to dance – but she had other plans.

‘She handed me her crutches and said she was trying out,’ her mom told People. ‘She hopped to the middle of the room and gave it her all. She wasn’t going to let anybody hold her back.’