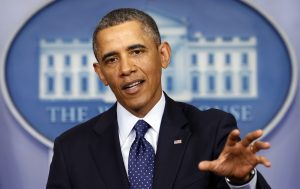 U.S. President Barack Obama speaks about the sequester after a meeting with congressional leaders at the White House in Washington March 1, 2013. Obama pressed the U.S. Congress on Friday to avoid a government shutdown when federal spending authority runs out on March 27, saying it is the “right thing to do.”
REUTERS/Kevin Lamarque (UNITED STATES – Tags: BUSINESS POLITICS)

Anyone who believes Obama is going to gird his loins and go after ISIS with a new ferociousness is kidding themselves.

He simply doesn’t have it in him. In all actuality Obama sympathizes with ISIS because ion his mind, they are an oppressed minority.

So no matter how many heads ISIS chops off, no matter how many Christians get killed, Obama is more concerned with the amount of carbon dioxide we exhale because he truly believes it’s a pollutant. That’s the problem with Obama’s leadership; he doesn’t know how to lead. Causing strife and dissension is more his thing, not being a Commander-in-Chief.