As if the heartbreak surrounding the killing of four American Marines in Chattanooga, Tn. was not hard enough to read and hear about, the last-minute conversations between the Marines and their loved ones are painfully sad[1].

In just a few text messages, one particular girlfriend of one of the four Marines killed by a radical Muslim in Chattanooga sent her hero boyfriend a final goodbye. 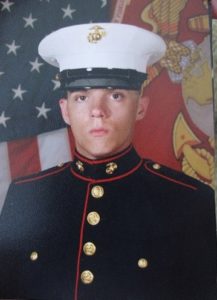 The girlfriend of one of the four Marines gunned down in a shooting at a Naval Reserve base in Chattanooga, Tennessee on Thursday has revealed the tragic last text message she received from her boyfriend in the midst of the rampage.

Caroline Dove, girlfriend of slain Lance Cpl Skip Wells, 21, says he sent her a text message on the morning of the brazen attacks, saying there was an ‘active shooter’.

Dove, who lives in Savannah, Georgia, was confused at first, thinking it was a joke. But she started to get worried when her mother sent her an article saying that four Marines had been killed in a shooting in Chattanooga.

She says she then started frantically texting Wells, saying ‘I love you’ and asking if he was there, but she never heard from him again.

Dove had to wait almost an entire day to get the news that her boyfriend of two and a half years had been lost in the tragic incident, when a mutual friend called to inform her of the bad news.

‘It was devastating to hear that he was one of the victims. I was so overwhelmed with emotions…I didnt know what to do,’ Dove said.

The loss of four American Marines for the country is devastating. But, for the families of the Marines, this terrorist attack is almost unfathomable.

Now, the Obama administration should be outlining how they can make sure something like this never happens again and sending personal condolences to these families and loved ones.

God bless these Marines and their families.