If looked out the window of your plane and saw this, would you freak out?

There are any number of things that can make you anxious flying: turbulence, crying children, slow WiFi, etc.  But imagine that you were on a flight…and you saw the wing of the airplane get HIT BY LIGHTNING[1]?!? 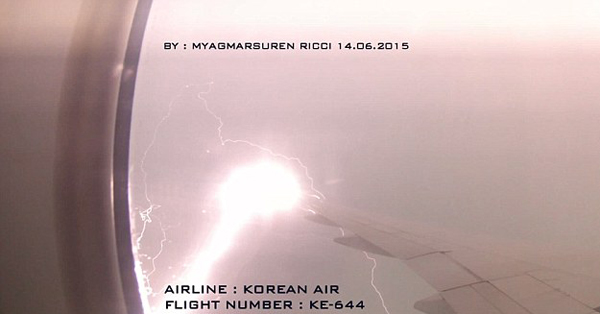 A passenger on board a Korean Air Lines flight apparently captured on video the terrifying moment the plane’s wing was struck by lightning.

Flying through a storm with visibility reduced, the plane is believed to be coming in to land in South Korea after setting out from Singapore.

The stunning video has been posted on Youtube, and has been credit to Myagmarsuren Ricci, who it is believed used a GoPro to film the incident.

Watch for yourself in the video below. I know that it doesn’t make me anxious to ever fly again…