Sympathy for people who are looking to America for a better life aside, breaking the law is breaking the law.  Period.  End of sentence. So you’ll have forgive me if I have no sympathy if a DRUG SMUGGLER got bit by a dog[1] while he was taking a nap…while illegally crossing the border. 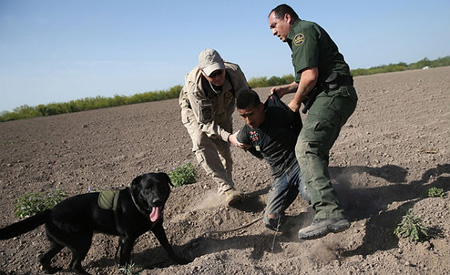 A band of illegal immigrants made it into Arizona and reportedly decided to get some rest beneath a tree while recovering from alleged dehydration. Jose Manual Marino-Najera and his fellow border crossers fell asleep under the Arizona tree and were awakened only after a Border Patrol dog bounded onto the scene and began sniffing at the bags of marijuana.

Marino-Najera claims a Border Patrol dog was “mauling” his hand as he woke up and saw the agents. The illegal immigrant alleges that the U.S. Border Patrol agents ignored his cries and shouts for help, allowing the dog to “tear apart” his hands for “several minutes.” According to the lawsuit claims by the illegal alien, the Border Patrol agents did not call off the dog until they walked over to arrest him.

Neil Cavuto asks the question, “If I break into your house and fall and hurt my foot because I tripped over something while going to steal jewelry in an upstairs bedroom, can I sue you for my injuries?” Was sad is, yes. Yes, you can.