In Obama’s America, illegal immigration is the norm and the gangs of Guatemala and El Salvador take advantage of it.

The most incident involved the MS-13 gang in El Salvador, as the Gateway Pundit reports[1]: 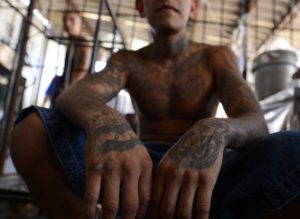 Illegal immigrant crime is widespread, but the media never wants to discuss it. In Virginia, a high school student was recently killed through orders from a gang in El Salvador.

A 17-year-old MS-13 gang member known as “the Enforcer” of Sterling, Virginia, shot and killed a high school student on orders handed down from gang leaders in El Salvador because the boy had left the gang and joined a rival group, according to testimony given Thursday by law enforcement officials investigating the homicide.

The testimony was given during a preliminary hearing in Loudoun County for two illegal Salvadoran immigrants accused of stashing the gun used in the September killing. It sheds new light on the motivation for a homicide that has elicited outrage from a U.S. senator.

The juvenile charged with first-degree murder in the death of 17-year-old Danny Centeno-Miranda has not been publicly named because he has not been charged as an adult.

Why were these guys even in the country though?
Endnotes: