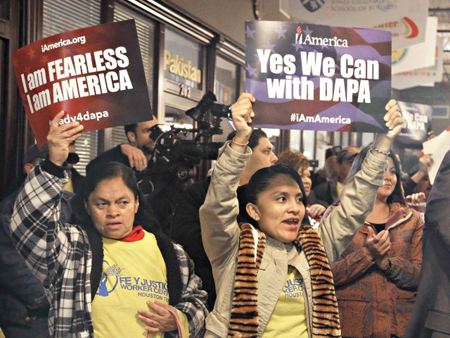 “These immigrants are not eligible for health insurance options under the Affordable Care Act [commonly known as Obamacare], but Californians who are granted DACA or DAPA become eligible for comprehensive Medi-Cal coverage under state policy if otherwise eligible based on income,” reads a March joint report from the UCLA Center for Health Policy Research and the UC Berkeley Center for Labor Research and Education. Medi-Cal is California’s form of the federal Medicaid program.

That joint report details the number of potential new DACA and DAPA recipients eligible for Medi-Cal at between approximately 360,000 and 500,000. This reflects the estimate that some 57% of those eligible for DACA or DAPA “lacked private health insurance and had income below the Medi-Cal eligibility threshold in 2013.” However, these are estimates, and the number could be higher or lower depending on a number of variables including estimates of the number of illegal aliens that exist in the state, how many apply for DACA and DAPA, and how many apply for Medi-Cal and meet the criteria.

About 1.5 MILLION who are in California illegally would be able to receive either either DACA or DAPA. There are currently legal questions as to where the executive actions are either constitutional, but the authors of this report except a recent Texas court decision about that to be overturned.