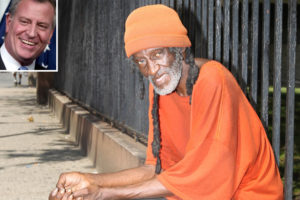 [1]Something is very wrong when Bill de Blasio’s biggest fans are street Bums.

NY Post[2] reports bums across the city hailed Mayor Bill de Blasio on Monday for relaxing enforcement against homeless panhandlers, saying it hasn’t been this good for them in years.

“I want to thank de Blasio for taking it easy on us. It’s easier for me to get by. Because of him, nobody bothers me,” said Phil Zasel, 63, who was hanging out near

“It’s better out here now. It’s the best time to be homeless. The weather is nice. I feel like I’m in California. So I’d rather be out here until it gets cold.”

“It’s not like 10 or 20 years ago, when I would get harassed by police all the time,” Zasel added.

“People just leave me alone, and I get some money sometimes, too.”

A similar sentiment was expressed by a filthy, toothless vagrant begging for change outside the Metro-North train station at 125th Street in Harlem.

The man, who identified himself as “Brown,” age 50, said he is much happier with de Blasio as mayor.

“Things have improved,” he said. “Cops are nicer. They let us be more.”

Directly under the tracks nearby, about two dozen other homeless people were sleeping in or stumbling around an encampment littered with layers of cardboard, a stained futon and rotting food remnants.

The gross spectacle outraged local residents and commuters at the station.