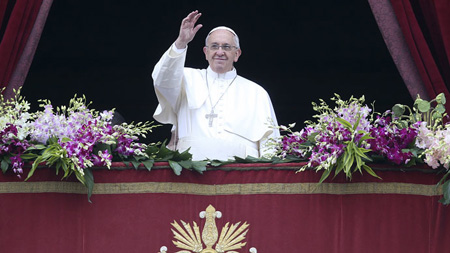 “I think in particular of the young people who were killed last Thursday at Garissa University College in Kenya, for all those who have been kidnapped, and for those forced to abandon their homes and loved ones.”

The reference to current events came after the pope discussed the importance of Easter, the essential component of Christian belief in the resurrection of Jesus. It’s a day of celebration, but the pope took the occasion to assail the blindness that meets attacks on the basis of faith — like the beheadings of Coptic Christians by Islamic State terrorists in February.

“Today we see our brothers persecuted, decapitated, crucified for their faith in you, under our eyes and often with our complicit silence,” he prayed, according to Agence France-Presse.

The Pope still voiced his hope for world peace. He also spoke of the nuclear agreement reached with Iran.