What kind of loser complains about an AMERICAN FLAG put up in honor of service members? Oh, looks like someone without even enough guts to leave a name…. 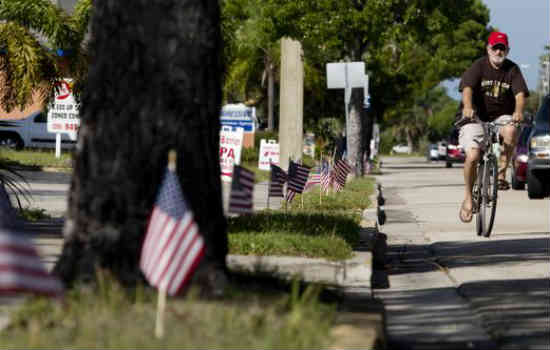 Jeff Verzi is an employee at Family Hardware in Cape Coral, Florida. With 6 family member serving in the military, Verzi wanted to honor each of them with an American flag. So, he put six flags out in front of the property in their honor. That’s when the trouble began.

An anonymous person complained about the flags and the city ordered the flags to be removed stating they were in violation of a rule that prohibits banners in the right of way. Verzi refused to do so and his boss, Eric Stange, supported his decision. Stange said, “It’s all about the veterans.” It appears that the community agreed and, in support of Verzi and our veterans, they staged their own protest of sorts against the cities’ demand for the removal of the flags.

Members of the community began posting flags Monday morning from Country Club to Coronado in downtown Cape Coral. In total, more than 500 flags were lined up along the street.
The city took heed of the community outpouring and said that no further action will be taken. However, Verzi said he will be attending the next city council meeting to explore getting the ordinance changed. Veterans from the American Legion have said they will accompany him to the meeting in full uniform.

Good for the community to stand up and kick back. Everyone in America should not have to fight for the right to display a flag for our country – if you have a problem with the flag, you can leave, and I know several people who will help you pack. Quit your whining, people, and have some sense of pride and patriotism.