Nothing gets my blood boiling more than injustice against someone who is really trying to do the right thing. This delivery man was minding his own business when some punk decided to attack him verbally and physically[1]… Of course, like with any other similar situation these days, there were morons around to film the entire thing, instigating the whole thing. There is one twist to this story though, that will give you the warm fuzzies…see for yourself. 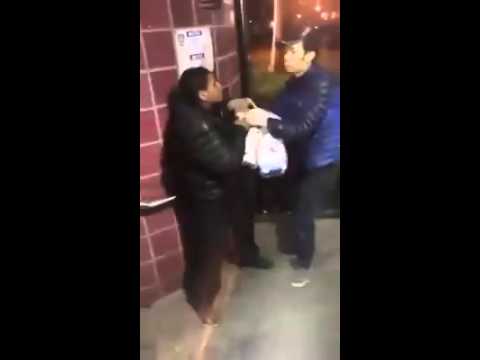 Upon viewing the video, you can see the deliveryman suffering verbal and physical abuse for close to a minute while unidentified observers laugh and encourage the teenager to hit and rob him.

Here’s when things got interesting.

Much to the surprise of the attacker, the deliveryman fights back, delivering multiple punches to the teenager. It seems like that act of self-defense came as a shock to the attacker and the onlookers.

After fighting back, the deliveryman yells for anyone at the scene to “call 911”–but no one decides to follow his request, instead choosing to mock his accent.

Finally, adults come to the rescue of the victim, arriving shortly onto the scene and abruptly ending the altercation.

According to a police source, the attacker seen in the video might go by the name “Scooter.” It is not clear as to when exactly the incident took place.

I was going to post up some comments from the youtube video here for you, to hear others’ reactions. However…I couldn’t find one clean enough to post… In a nutshell, according to the comments: Thug: 0 Good Guy: 100 with a whole army of angry people to back him up.