Inside The Jihadi Workshop Of Death: How ISIS Is Developing Driver-Free Vehicles For Bomb Attacks

Too often, we in the West forget that Islamic terrorism is pretty sophisticated. While we imagine Shemagh-adorned fighters in caves with AK-47s, the truth is that they have grown fairly sophisticated in their jihad against the West. Take a look into the Jihadi workshop that trains terrorists in the art of death.[1] 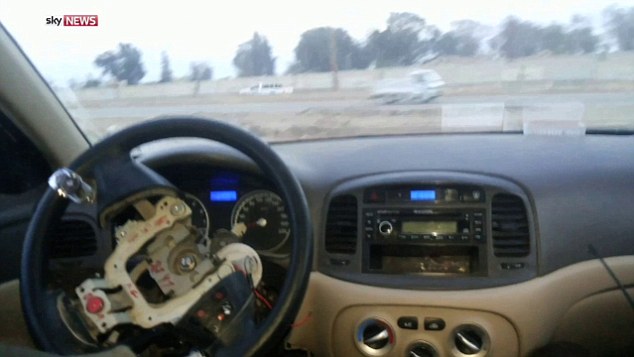 ISIS[3] is developing driver-free cars in a bid to carry out spectacular attacks against the West, it has emerged.

Scientists and ballistics experts have been employed by the terror group to create sophisticated new weapons intended to bring bloodshed to Europe.

From a ‘jihadi university’ in the Syrian city of Raqqa, they are working on building remote-controlled vehicles which can be used as mobile bombs in devastating strikes.

In another chilling twist, IS – also called Daesh – have stunned Western security agencies by modifying defunct missiles so they are capable of downing passenger jets or military aircraft.

The products of the terror group’s research-and-development unit were disclosed after eight hours of training videos carried by a captured IS fighter were handed to Sky News[4].

Major Chris Hunter, a former UK Special Forces soldier and advisor to the British military, said he was shocked at some of the developments revealed in the film footage.

He said: ‘I think this is one of the most significant intelligence finds in terms of Daesh.

‘What we’ve seen with their typical propaganda videos is they’re very, very high quality. They’re designed, they’re produced to inspire people and prospectively touch the nerves of anybody who is viewing them; they’re done in a very specific way.

‘With this training footage it’s very clearly purely designed to pass on information – to pass on the progress in the research and development areas – and it gives us a very good insight into where they are now, what they’re aspiring to do and crucially the diversity of the types of threats we might face. I would say it is an intelligence gold mine.’

According to the film clips, an IS team has produced fully-working driver-free cars which can be packed with explosives and driven into a target, causing horrific damage.

heat signature of humans in a bid to allow the vehicle to fool scanning machines that protect key buildings in the West.

The videos would be smuggled to Islamist sleeper cells in European cities who would then use the instructions to build their own car bombs.

This would potentially allow terror groups to cause carnage without risking their own lives.

The component could allow the fanatics to recommission thousands of missiles that Western governments assumed were redundant through old age.

Heat-seeking warheads can be used to attack passenger and military aircraft. They are 99 per cent accurate once locked on.

For decades, terror groups including the IRA had these weapons but storing them and maintaining the thermal battery – a key component to the warhead – was virtually impossible.

An IS trainer carrying the unedited training videos was captured by the remnants of the Free Syrian Army (FSA) as he headed north through Turkey towards Europe.

In Turkey, an IS defector said that the top secret training programme was known about in Raqqa. He confirmed the programme was designed for attacks in Europe and further afield, said Sky News.

He said: ‘Videoing and documenting this training programme was meant for Europe to cause huge damage.

‘But doing such a programme and documenting it was meant to target a large number of people and in more than one location, of course it wasn’t meant either for Syria or Iraq.’

But don’t worry; according to President Obama, we should not be worried by the threat of ISIS who Obama maintains is contained and merely the “JV Team” of Islamic terrorism…