It’s a move in the right direction[1]:

Iraqi forces broke through to the jihadist-besieged Shiite town of Amerli today where thousands of people have been trapped for more than two months with dwindling food and water supplies.

It is the biggest offensive success for the Iraqi government since militants led by the Sunni Islamic State jihadist group overran large areas of five provinces in June, sweeping security forces aside.

The breakthrough came as America carried out limited strikes outside north Iraq for the first time since its air campaign against the militants began more than three weeks ago, and aircraft from several countries dropped humanitarian aid to Amerli.

The operation was launched on Saturday after days of preparations in which Iraqi security forces, Shiite militiamen and Kurdish fighters deployed for the assault and Iraqi aircraft carried out strikes against militants.

The U.S. had carried out air strikes against Islamic State fighters near the town in northern Iraq and airdropped humanitarian aid to civilians trapped there, the Pentagon said.

You know what would have been nice? If we didn’t let these monsters take half of Iraq in the first place.

But really, who could have seen that coming?[2] 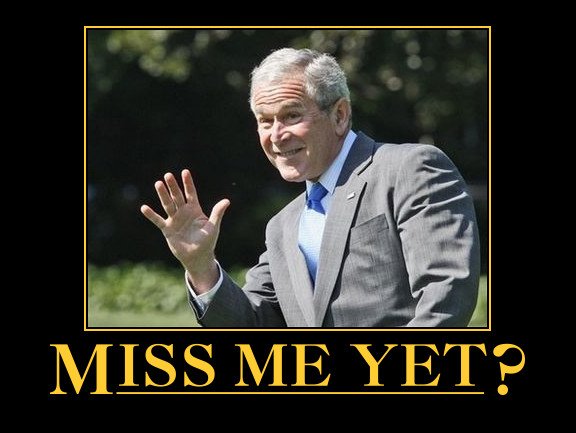 President George W. Bush believed that a precipitate U.S. troop pullout would lead to increased chaos, bloodshed, and eventual terrorist victories. Given the recent dramatic events in Iraq, it looks like Mr. Bush knew what he was talking about.

He said that the option proposed by people like Senators Obama, Clinton and Biden was to “pull back from [Baghdad] before the Iraqis could defend themselves against these radicals and extremists and death squads and killers. That risked turning Iraq into a cauldron of chaos.” He explained that “the enemies of freedom, love chaos. Out of that chaos they could find new safe havens. Withdrawal would have emboldened these radicals and extremists. It would have confirmed their belief that our nations were weak. It would help them gain new recruits, new resources. It would cause them to believe they could strike free nations at their choice.”

Mr. Bush concluded that “withdrawal would have increased the probability that coalition troops would be forced to return to Iraq one day, and confront an enemy that is even more dangerous. Failure in Iraq should be unacceptable to the civilized world.”

Something to remember when Obama starts talking about how he led the liberation of Iraq from the jayvee squad[4].