Hilarious footage has captured the moment an Irish grandmother got to ride a roller coaster for the first time in her life – thanks to a virtual reality headset. This is GREAT.[1] 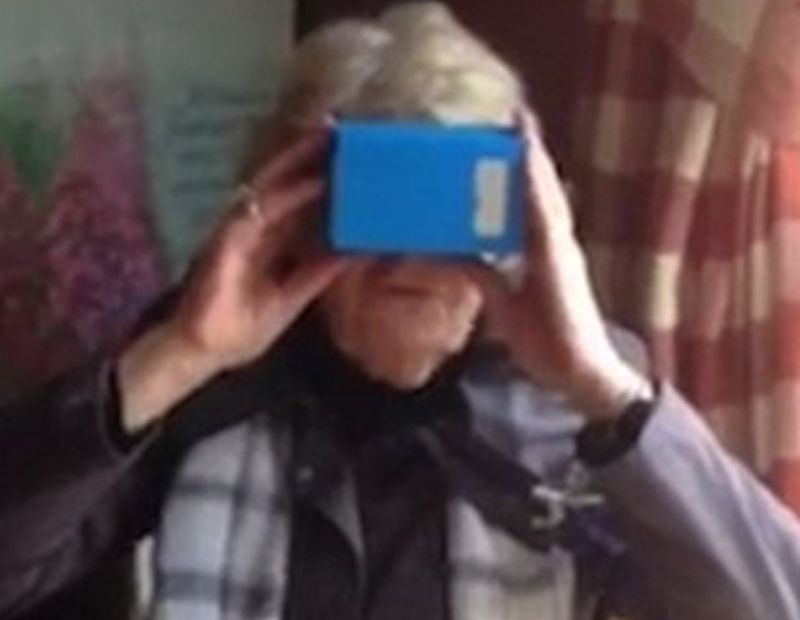 The grandmother, whose reaction to the ride is captured by her grandson who developed the programme, can’t help but howl with terror, much to the amusement of her relative.

She repeatedly asks her grandson what it is that she is ‘sitting on’ during the video, having never ridden a real roller coaster in her time.

After the video starts with her wearing the headset, she says: ‘Mother of God almighty. Oh mother of God the chair is moving.

‘This will give you a heart attack. Oh I’ve lost five stone. No take it easy. No, stop, oh mother of God.

‘No, no, no, no; lovely this is very dangerous. Are you sure there’s a thing like this in the world?’

When her grandson tells her that she can look behind her, she adds: ‘Oh Jesus, that’ll give you a heart attack. What do they call it again?’ to which he replies: ‘It’s a roller coaster.’

‘Can you imagine doing a roller coaster?’ she says. ‘I think I’m flying through the world now. Where are these buildings?

When the grandson tells her he designed the ride on the computer, she retorts: ‘It’s like something out of I-don’t-know-what, Star Wars or something.

‘Oh no, it’s going very fast. How can they make something like that?’

After her relative tells her it’s ‘cool’, she quickly replies: ‘What do you mean f****** cool? You think you’re going to get hit and everything. Where have they got this thing?

‘I have to give it up. Oh Jesus this is terrible, I couldn’t put up with that at all. Oh no, I have to go. Oh God my head – gives you a funny feeling doesn’t it. Mother of God and his bloody mother.

‘It makes you very confused in the head and everything.’

This gran reminds me of my dear Bubbe. She was never much for thriller rides, but I can imagine how scared she would be to use a VR headset. I’m sure there would be a few more cuss words sprinkled in as well!