ISIS issues a threat: Calls for an repeat of 9/11

As if ISIS isn’t dangerous enough to the middle east, this week they released a new video calling for attacks to the U.S.   In the 11-minute video, ISIS calls for supporters to launch attacks within the U.S.[1] 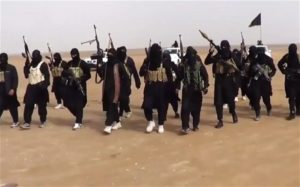 At this juncture I would note the New York Times’ front page article[4] on December 29 that described how America’s top war fighters, namely Special Operations Command, freely admit that they don’t understand the ideology driving ISIS and other Islamic terror groups:

“The Islamic State has released a new 11-minute video called “We Will Burn America” that calls for supporters to attack the American homeland and promises another 9/11.

an Special Operations forces in the Middle East, sought help this summer in solving an urgent problem for the American military: What makes the Islamic State so dangerous?

Trying to decipher this complex enemy — a hybrid terrorist organization and a conventional army — is such a conundrum that General Nagata assembled an unofficial brain trust outside the traditional realms of expertise within the Pentagon, State Department and intelligence agencies, in search of fresh ideas and inspiration. Business professors, for example, are examining the Islamic State’s marketing and branding strategies.

“We do not understand the movement, and until we do, we are not going to defeat it,” he said, according to the confidential minutes of a conference call he held with the experts. “We have not defeated the idea. We do not even understand the idea.”

General Nagata’s frustration is shared by other American officials. Even as President Obama and his top civilian and military aides express growing confidence that Iraqi troops backed by allied airstrikes have blunted the Islamic State’s momentum on the ground in Iraq and undermined its base of support in Syria, other officials acknowledge they have barely made a dent in the larger, longer-term campaign to kill the ideology that animates the terrorist movement.

You can call in all the marketing executives and Harvard academics all you like, but when the Obama administration — meaning the entire U.S. government – as a matter of established policy[5] refuses to acknowledge the ideology and intentions that our enemy publishes IN ENGLISH in the form of videos, audio recordings and magazines, and actively prohibits anyone in a government department or agency[6] from discussing or speaking about said ideology[7], you really are beyond hope. And so is America.”

Maybe instead of working on deals that really get us nothing for countries that chant ‘death to America,’ President Obama should concentrate more on the threat that ISIS is to our safety.  It seems we are treating them with the same views we did Al Qaeda prior to 9/11.  That is certainly a dangerous precedent to base our current lack-of-action on!