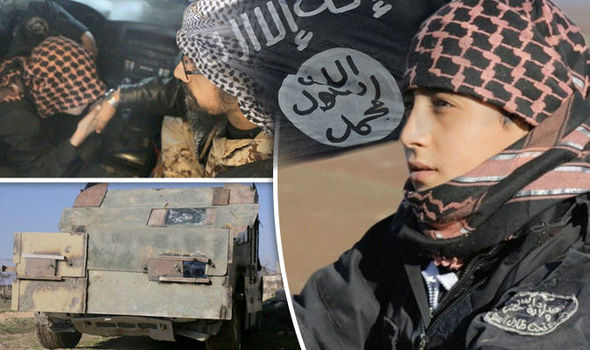 [1]The news from ISIS continues to get worse, as they become more emboldened by expanding into new territory and recruiting additional fighters. Stories of child suicide bombers are broadcast as accomplishments.[2]

The Gateway Pundit has the details on a child whose father sent him off to die by driving a vehicle with explosives into Syrian soldiers,

The youngster, who appears to be aged around 11, is identified as Abu ‘Imara al-‘Omri in an ISIS propaganda shot which boasts how the boy helped them wrestle back control of the village of Ghazl near Aleppo, in Syria.

The shocking images show the primary school age child toting a gun and gazing wistfully into the distance, while another shot shows his fortified truck, which would be packed with explosives, and reinforced to defy a hail of bullets from desperate troops trying to ward off an attack.

The final photograph shows young Abu, sitting inside the dark truck, kissing his father’s hand as readers are told he received his blessing ahead of the suicide mission.

These people are sick and must be stopped. Unfortunately, under Obama’s bumbling foreign policy in Libya, Iraq and Syria, allowing ISIS to expand in vacuums that he helped create, there has been little success combating them. We can only hope a Republican becomes president. Hillary Clinton helped create the power vacuum in Libya, and Bernie Sanders is close to a pacifist.