ISIS RATCHETS UP SAVAGERY: Cuts Limbs Off Iraqi Victim Hung on a Cross

I’m seriously running out of words to describe these stories about ISIS.  Sickening and deplorable just don’t seem to cut it any more.  Yet here we are, right after ISIS released a new video called “The Deterring of Spies[1],” where over the course of four minutes they crucify and cut off the hands of…someone. 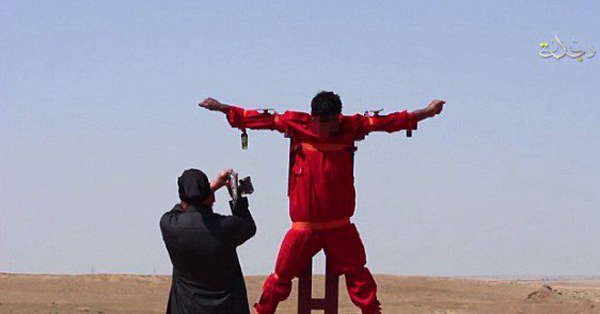 In shocking footage which has plumbed to new depths of depravity – even by ISIS’s sickening standards – the knife-wielding jihadist is seen slicing off the man’s limbs as he hangs helplessly from the wooden stake.

After the barbaric attack, the video then zooms in to show the man’s corpse – dressed in an orange Guantanamo-style jumpsuit – hanging lifelessly in the middle of the desert.

Chillingly, the four-minute video even includes a ‘confession’ with the man before he is executed. The terror group claims it carried out the brutal killing because the man, believed to be from Iraq, was working as a spy.

Shocking footage, “even by ISIS’s standards.” We don’t even know what the crime was, other than – we’re assuming – spying.