‘It Is Being Removed Immediately’: University Scrambles After Learning of ‘Extremely Disappointing’ Mural

A Marquette University professor discovered over the weekend that a disturbing mural had been posted on his campus. The mural honored Assata Shakur, a Black Panther who was convicted of murdering a New Jersey cop.[1] After it was pointed out to university officials, they say they are removing it immediately: 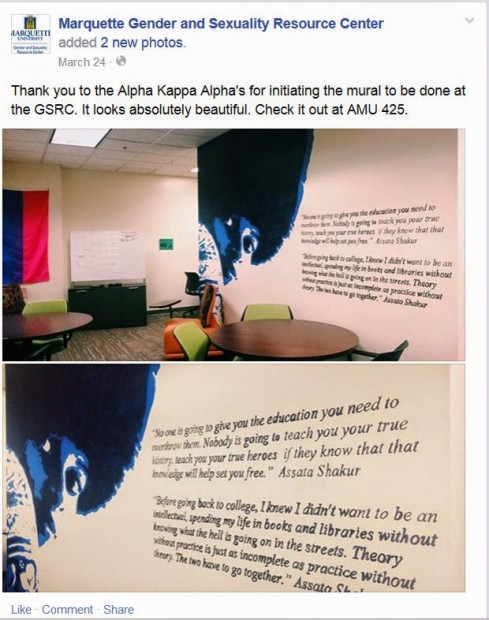 The university issued a statement Sunday claiming that the “university’s senior leadership just became aware” of the mural “displayed in a remote area of campus.”

“This is extremely disappointing as the mural does not reflect the Guiding Values of Marquette University. It is being removed immediately,” the school said. “We are reviewing the circumstances surrounding the mural and will take appropriate action.”

The university said Monday that the mural had been removed late Sunday.

McAdams told Fox News Monday that he learned about the Mural when the Center “bragged about it” on Facebook.

“I didn’t do any brilliant investigative journalism, I just read the Facebook page,” he said.

How does a mural like that go through the design and implementation phase without one person thinking it is an extremely bad choice? It’s well-known that leftist activists use their positions on university campuses to attempt to promote their beliefs, but one would hope that one sane person would put their foot down before such a mural was completed.