Jaw-Dropping VIDEO: Driver records an unexpected ‘noise from behind’ what could be moments before death

While stuck in traffic behind two semi trucks on south bound Interstate 95 in New Jersey, a man started video recording the scene while waiting for the trucks to clear out of the way… then this heart-wrenching moment [1]was captured on video. 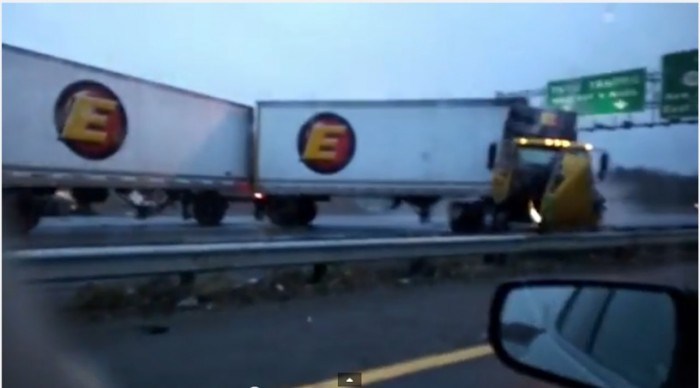 The terrifying moment began after the man heard a “noise from behind” him. When he turned to look, he saw another semi truck that had apparently hit a patch of black ice and was barreling towards him out of control.

The driver of the truck seemingly steered away from the man’s vehicle to avoid hitting — and potentially killing — him. The semi truck went plowing over the median and into oncoming traffic on the other side of the interstate.

“Once I turned off camera, I called in 911 and reported the accident. After that I came to the truck and the rest of the cars to verify they were alright. After arrival of NJ State Trooper and his dismissal confirming that he does not require my presence, I left the scene,” the man wrote in the video’s description.

Jaw dropping moment will have you holding your breath! Watch the stunning video below via YouTube: